What is Price-Level Targeting? Has Its Time Come?

As we enter 2011, we are hearing more about something called price-level targeting. It clearly has something to do with monetary policy, but what does the term really mean, and why is it coming up for discussion right now? Is it a policy the Fed is likely to adopt, or is perhaps already using?

Price-level targeting is not a new idea. It was used by the Swedish central bank as long ago as the 1930s. It has been widely discussed in the academic literature. It is most easily explained by comparing it with inflation targeting, its more widely used policy alternative. An inflation-targeting central bank tries to hold the price level on or close to a path that increases at a steady rate over time, say 2 percent per year. When everything is functioning smoothly, a price-level targeting central bank would aim for exactly the same path. The difference between the two policies comes when the inflation target is missed.

Suppose, as is the case in the United States now, inflation drops below its target rate for an extended period, as at point A in the chart below. (The vertical scale of the chart is exaggerated for clarity, but it is roughly based on actual U.S. data and Fed forecasts.) Having arrived at point A, the question is what kind of corrective action to take. The inflation targeter would take whatever actions are necessary to get the rate of inflation back to 2 percent. If successful, those actions would put the price level on a new path parallel to, but permanently below, the original one. The price-level targeter would instead undertake policies to return the price level to the original path, even though doing so would require the rate of inflation temporarily to exceed 2 percent, along the segment A to B, until the price level had made up for its earlier shortfall. 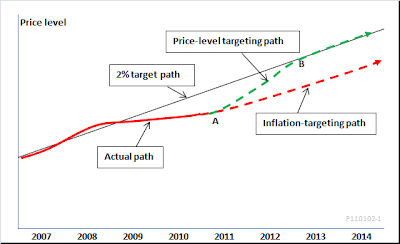 Either strategy can be interpreted as broadly consistent with price stability, but price stability is not the only goal of monetary policy. The Fed operates under a dual mandate that requires it both to maintain price stability and to achieve the highest level of employment consistent with doing so. In the case at hand, price-level targeting involves more aggressively expansionary actions that in all likelihood would reduce unemployment more rapidly than simple inflation targeting. At the same time, it would cause no more inflation than there would have been if the price level had never fallen below its its intended path in the first place.

One source of opposition to price-level targeting is the fear that it could increase uncertainty. It could "befuddle a public long accustomed to thinking in terms of inflation rather than price levels," as The Economist put it in a critical article. Increased uncertainty, in turn, could raise risk premiums and make business planning more difficult.

Another concern is that price-level targeting could undermine the Fed's hard-won credibility. The thinking seems to be that if the Fed openly encouraged a rate of inflation above 2 percent even for a brief period, people might come to doubt its commitment to price stability altogether.

A third objection is that price-level targeting might not be appropriate in all circumstances. In particular, it could cause problems if an external shock, like an increase in global energy prices, temporarily pushed inflation above, rather than below, its target path. In such a case, rigid adherence to a price-level target would require policy measures sufficiently contractionary to achieve absolute declines in prices and nominal wages in non-energy sectors. Rather than subject the economy to such harsh medicine,  it might be better to let bygones be bygones, and put the economy on a new 2 percent inflation path starting from a higher base.
Not everyone finds these objections persuasive. Charles Evans argued in an October 2010 speech that the standard objections could be overcome by using what he calls state-contingent price-level targeting. His version of the policy would work as follows:

First, the Fed need not, and should not, commit to price-level targeting as a policy for all seasons. Instead, it should make it clear that that price-level targeting would be undertaken only when the economy has undershot the rate of inflation that is desirable in the long run. Other states of the economy, including overshooting of the inflation target due to external shocks, would be handled differently.

Second, Evans addresses the problem of expectations. The worry is that inflation expectations could become unanchored as price-level targeting began to move the economy along the high-inflation A-to-B segment in our earlier chart. To prevent that from happening, the Fed should be explicit about its exit conditions. It should make it clear that as soon as the desired long-run price-level path has been reached, monetary stimulus will be ratcheted down by enough slow inflation to the rate thought desirable in the long run.

Third, clear communication would eliminate the risk that price-level targeting would undermine the Fed's credibility. Credibility can come under threat only if the Fed fails to make clear what it is trying to do, or makes a clear statement of its intentions and then does something else instead. State-contingent price-level targeting that is explicit about both entry and exit conditions is arguably more consistent with preservation of credibility than what the Fed is now doing.

Consider, for example the FOMC's most recent policy statement of December 14, 2010. The statement does not really give much guidance about just what the Fed is targeting or what its exit conditions are. We are told that the Fed will try to keep the fed funds rate low for "an extended period." We are told that it will continue its QE2 program of buying long-term Treasury securities. But clarity is significantly undermined by the vagueness of the statement of exit conditions: "The Committee will continue to monitor the economic outlook and financial developments and will employ its policy tools as necessary to support the economic recovery and to help ensure that inflation, over time, is at levels consistent with its mandate." Does that mean that the Fed will ease off as soon as inflation hits 2 percent? Will it instead persist with its current aggressively expansionary policy until employment has recovered, even if doing so temporarily results in a higher rate of inflation? In short, the statement could easily be read as consistent either with pure inflation targeting, or with price level targeting, or with flying by the seat of the FOMC's pants.

The bottom line: We can look forward to a renewed debate on price-level targeting in 2011. Support for the policy will be strengthened a bit by the fact that the Chicago Fed has a voting seat on the FOMC in odd-numbered years. If inflation remains stubbornly low, as it did throughout the fall, perhaps Chairman Bernanke will become less confident that "both inflation expectations and actual inflation remain within a range consistent with price stability," one of the reasons he gave for rejecting price-level targeting in his August speech. It is even possible that the FOMC has already committed to de-facto price level targeting without saying so explicitly. Developments over the coming months should make it clear whether the time for price-level targeting has now come.

Follow this link to view or download a brief slideshow discussing price-level targeting, including the views of supporters and critics of the policy.
Posted by Ed Dolan at 9:03 PM