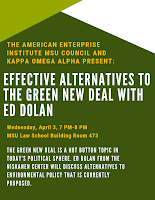 The Green New Deal resolution was introduced to Congress as H.R 109 on February 7. It immediately became the central focus of the progressive wing of the Democratic party.

It was never intended as a piece of legislation. It would more accurately be described as an assemblage of aspirations regarding the environment, jobs, health care, and the treatment of oppressed communities. It attracted more than 100 sponsors in the House. On the Senate side, it attracted the co-sponsorship of all six sitting members running for the Democratic nomination and several others.

Then, on March 27, Majority Leader Sen. Mitch McConnell forced an actual floor vote on the Green New Deal. It did not attract a single "yes" vote. Nearly all Democrats, including all six co-sponsors of the bill, voted "Present." Republicans and a handful of red-state Democrats voted "No."

What does it say of a resolution when even its own co-sponsors will not vote for it? To me, it says that there is a big gap between aspiration and implementation. Already, Democrats are turning away from the Green New Deal as a comprehensive package. They are looking for alternatives in the form of more specific, more pragmatic, more targeted legislation.

On April 3, I discussed all this and more in a talk at Michigan State University, sponsored by the American Enterprise Institute MSU Council and Kappa Omega Alpha. Here is the slideshow for the presentation. Comments and suggestions welcome!
Posted by Ed Dolan at 7:15 PM 3 comments: