Universal Basic Income vs. Unemployment Insurance: Which is the Better Safety Net?

A universal basic income (UBI) and unemployment insurance (UI) are two possible forms of social insurance for an economy in which job loss is a significant risk. Which works better? How generous should either program be? Would a combination of the two be best of all? These are the questions that Alice Fabre, Stéphane Pallage, and Christian Zimmermann (FPZ) address in a recent working paper from the Research Division of the St. Louis Fed.

The answers that the authors give to these questions will disappoint UBI supporters:
Skeptics are likely to seize on these findings, but in my view, they do not support a blanket rejection of a UBI. Instead, as I will explain, they highlight how important it is for UBI proponents to pay attention to details of financing and program design. >>>Read more
Posted by Ed Dolan at 4:50 AM No comments:

The Economics and Politics of a Variable, Price-Smoothing Energy Tax

Oil is down again. The price of Brent crude, which moves US gasoline prices, is below $100 a barrel
for the first time (save a single month) in five years.

A better energy policy, as I have explained many times before, would be one that required people to pay the full costs of the energy they use. That would include not only costs of production, but also the external costs arising from harmful spillover effects. By and large, energy users in the United States now pay only costs of extraction, processing of fossil fuels, and generating of electricity. The result is that they use energy wastefully, pushing their consumption beyond the point where the benefits from using an additional unit fall below its full costs. (For details, see the links at the end of this post.)

And no, the full-cost argument is not just about climate change. Personally, I think there is a strong argument for counting climate change among the spillover effects of fossil fuel use, but if you are a skeptic, there are plenty of other, very tangible external costs to consider. >>Read more

Follow this link to view or download a slideshow on the economics of a price-smoothing oil tax
Posted by Ed Dolan at 11:17 AM No comments: 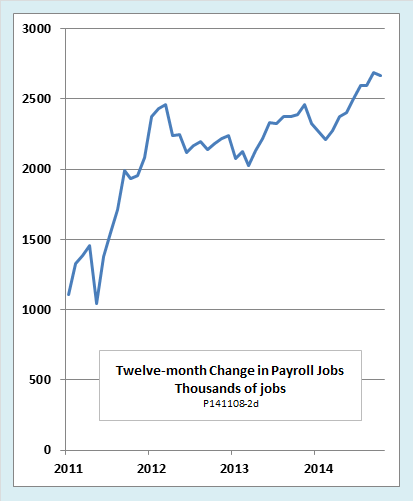 The first major report on the health of the US economy for the fourth quarter of 2014 showed
continued gains in the job market. Payroll jobs were up by more than 200,000 for the ninth month in a row. With upward revisions to August and September data, the twelve-month jobs gain was 2,646,000. Annual job gains are now running at their strongest level since the peak of the pre-recession boom. The gains were broadly based, with construction, manufacturing, services and government all adding workers.
A separate survey of households also showed strong gains, with the unemployment rate falling to 5.8 percent. A broader measure of unemployment, U-6, which takes into account involuntary part-time workers and discouraged workers, fell to 11.5 percent. Both figures were new lows for the recovery. The civilian labor force grew by 416,000.>>>Read more

Why Quantitative Easing Did Not Work According to the Textbook Model

The Fed has declared an official end to quantitative easing. It is a logical time to ask, did QE work? gives the honest answer in a recent post on Vox: “It’s very, very hard to know.”
Danielle Kurtzleben
Still, we do know three things that QE did not do. These are worth pointing out, especially since back when QE was just getting under way, there were people who expected that QE 2 would do all of them.

1. QE did not work according to the textbook model
One thing was never in doubt.  As the Fed added massively to its assets, QE would cause an equally massive increase in the monetary base—the sum of bank reserves and currency that accounts for the bulk of its liabilities.

Some economists used to refer to the base as high powered money. It got that name from a familiar textbook model, according to which two simple ratios link the monetary base to the rest of the economy. One is the money multiplier, which is the ratio of ordinary money (M2) to the monetary base. The other is the ratio of nominal GDP to the M2 money stock, known as the velocity of circulation of money, or just velocity, for short.

If the money multiplier and velocity were constants, then the monetary base would be high-powered indeed. Any increase in the base (which the Fed can manipulate at will) would cause a proportional increase in nominal GDP. The only thing left to determine would be how much of the change in nominal GDP would express itself as an increase in real output and how much as inflation.>>>Read more

Follow this link to view or download the slideshow "Quantitative Easing and the Fed 2008-2014: A Tutorial"
Posted by Ed Dolan at 4:08 AM No comments: