A Universal Basic Income: Conservative, Progressive, and Libertarian Perspectives (Part 3 of a Series)

The idea of a universal basic income (UBI) has been getting a lot of attention recently, sparked in part by the Swiss decision to hold a referendum on the idea. A UBI differs from other income support policies in that it provides a cash grant, large enough to meet basic needs of living, to every member of society, regardless of other sources of income.

The first post in this series compared a UBI to other income support policies in terms of effectiveness in reducing poverty, work incentives, targeting, and administrative efficiency. The second post argued that a UBI with a per person grant approaching current official poverty thresholds would be affordable without increasing the federal budget deficit, raising marginal tax rates, or radically raiding the fortunes of the rich. This third post looks at the varying perspectives of conservatives, progressives, and libertarians, explaining why there are both supporters and opponents of a UBI in each camp.>>>Read more
Posted by Ed Dolan at 12:27 PM No comments:

How Alarmed Should We Be About the Rise in Part-Time Work?

The share of part-time workers in the U.S. labor force rose to unusually high levels during the recession of 2007-2009 and has fallen only slowly during the subsequent recovery. As the following chart shows, the share of workers putting in less than 35 hours a week hit a low of 15.5 percent of the labor force in October 2007 and then rose sharply to a peak of 18.1 percent in May 2009. As of December 2013, the share of part time work was still over 17 percent, less than halfway back to the pre-recession low. 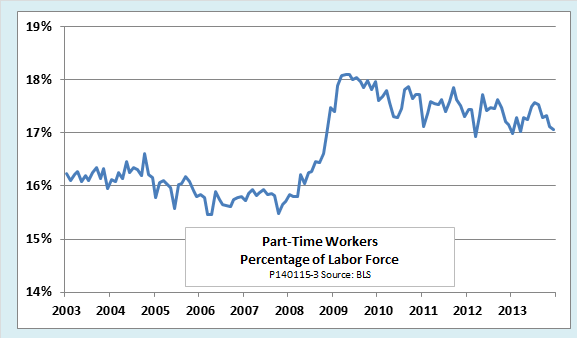 Many observers find the trend toward part-time work alarming. In her blog for The New York Times, Catherine Rampell writes,


One of the more unsettling trends in this recovery has been the rise of part-time work. We are nowhere near recovering the jobs lost in the recession, and the track record looks even worse when you consider that so many of the jobs lost were full time, whereas so many of those gained have been part time.

Elsewhere, a writer for the Minnesota Budget Project laments,


Many workers are struggling to climb out of the Great Recession. They are still looking for jobs, working part time, earning less than they did before the recession, or accepting jobs that don’t meet their abilities.

How worried should we be? To understand what is going on, we need to dig beneath the summary statistics shown in the chart and look the details, some of which I find surprising. >>>Read more
Posted by Ed Dolan at 4:06 AM No comments:

Could We Afford a Universal Basic Income? (Part II of Series)

The first post in this series looked at the economic case for a universal basic income (UBI), by which I mean an unconditional grant, paid to every individual, that would be sufficient to maintain a decent minimum standard of living. In that post, I argued that replacing the many overlapping income support policies currently used in the United States with a UBI would be more effective in raising the incomes of poor and near-poor households while strengthening work incentives and improving administrative efficiency.

The evident economic downside is that a UBI would be less narrowly targeted on the poor than existing programs. Because it would not, by its nature, be means tested, it would channel billions of dollars in grants to middle- and upper-income households. Some think that would make a UBI unaffordable without ruinous tax increases, deficits, or cuts to other government programs. This post looks at some of the fiscal realities of a UBI and concludes that such a program might not be fiscally unrealistic after all. >>>Read more
Posted by Ed Dolan at 4:22 AM No comments: 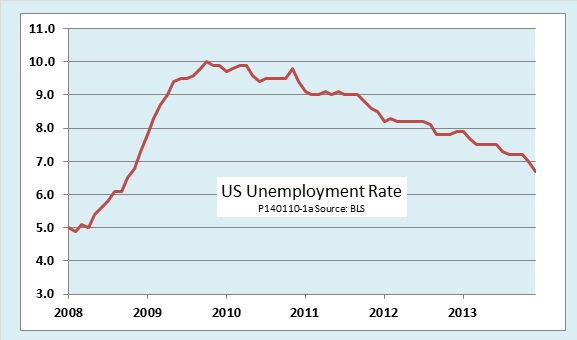 Follow this link to view or download a classroom-ready slideshow with charts and analysis of the latest employment report
Posted by Ed Dolan at 10:36 AM No comments:

The Economic Case for a Universal Basic Income

The news that Switzerland will hold a referendum on a proposal to provide every citizen with an unconditional grant of 2,500 Swiss francs a month (about $2,800) has sparked renewed interest in the old idea of a universal basic income (UBI). Under such a program, the government would not just top up the incomes of the poor, but would give a subsistence-level grant to everyone, regardless of wealth, work status, or anything else. The appeal of a UBI seems to cut across the ideological spectrum. Progressives, libertarians, and conservatives have all supported one or another variant.

This post begins a series that will explore various aspects of a universal basic income, beginning with the simple economics of the UBI and contrasting it with other approaches to income support. Future posts will examine the fiscal cost of a UBI and some of the political and ideological issues it raises.

What makes an income support program good or bad? Although opinions differ, people who evaluate existing or proposed policies often appeal to these four criteria:
Unfortunately, no income-support mechanism can simultaneously meet all of these criteria in full. There are inherent trade-offs among them. Let’s take a look at the different ways that actual and proposed policies handle those trade-offs.
>>>Read more
Posted by Ed Dolan at 4:29 AM No comments:

Austerity and the Euro in Two Graphs: A Reply to Paul Krugman

Paul Krugman started the New Year yesterday with a zingy little post in his New York Times blog titled “The State of the Euro in One Graph”. Here is the graph . . . 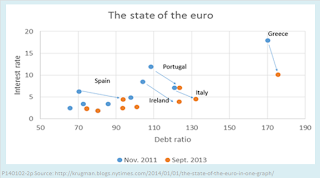 . . . and here is the text that accompanies it:


What you see here is that borrowing costs for the troubled euro countries have dropped a lot. But it’s not because austerity policies have brought their debt under control — debt ratios are still rising, in large part because of shrinking economies and deflation. Instead, there has been a dramatic flattening of the relationship between debt and interest rates.