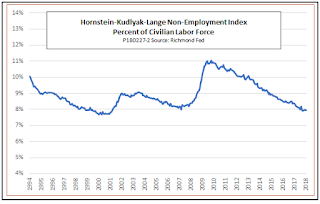 Reposted from NiskanenCenter.com
Posted by Ed Dolan at 1:27 PM 1 comment:

From the Nixon Era, a Pioneering Proposal for Universal Catastrophic Health Insurance 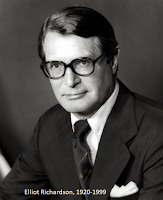 People today remember the Nixon era mainly for the fiasco of Watergate, but there were positive moments, as well. Those included the first moon landing, passage of the Clean Air Act, and a dramatic diplomatic opening to China. There were also some bold policy initiatives that did not immediately bear fruit. This post takes a look at one of them, a proposal for universal catastrophic health insurance from Elliot Richardson’s Department of Health, Education and Welfare. It went nowhere then, but its time may now have come.

Elliot Richardson and the Mega Proposal

The child of a wealthy Boston family, Richardson was seemingly destined for public service. By the time he came to Washington, he had graduated from Harvard, landed at Utah Beach on D-Day, returned to Harvard for a law degree, and served as both Lieutenant Governor and Attorney General of Massachusetts.

Richardson was seen by those who worked under him as a rare combination of policy analyst and practical-minded politician. He had big ideas that went far beyond the clutter of overlapping programs he found when he arrived at HEW in June of 1970. Over the next two years, he put his staff to work on a sweeping plan for reform, known as the Mega Proposal, which covered all of the major areas for which HEW was responsible. The plan for healthcare reform was part of it.
The rationale of the Mega Proposal was explained in its preface:

I have written frequently about universal catastrophic coverage (UCC) as a possible healthcare reform compromise. Under such a program, the government would provide health insurance with a deductible scaled to household income. [1] [2] [3]  The UCC policy would protect people against financial ruin caused by healthcare costs. At the same time, they would be responsible for financing their own routine care through by cash, health savings accounts, or private supplemental insurance.

My early posts provide hypothetical examples, but how would real people fare? An article by Abby Goodnough in this week’s New York Times provides two real world examples. We can see how they would fare under UCC compared to their present situation.


One is the middle-class Hurd family, who struggle to afford coverage on the ACA exchange. Both Gwen and Matt Hurd workwork but neither gets healthcare benefits. They earn about $82,000, more than four times the poverty level for their family of three, too much for ACA subsidies. Their healthcare premium is $928 a month with a $6,000 deductible per person, plus copays. The NYT article does not give full details, but based on averages, their maximum out-of-pocket healthcare costs would be about $25,800, or 32 percent of their total income.

The other NYT example is Emilia DiCola, a single woman working part-time while trying to establish a career in opera. She now earns $15,000 from occasional singing gigs plus part-time driving for Uber. Her earnings are just low enough to qualify for Medicaid. Even if her state introduces work requirements for Medicaid, she will qualify because of her part-time jobs.

Under UCC she would still get for full coverage, given her $15,000 income, but she would face substantially different incentives to increase her earnings. At present,  she must carefully limit her hours of work to stay under the Medicare threshold. If, say, she worked enough hours to double her income, she would need to purchase insurance on the ACA exchanges. Even with subsidies, her premiums and out of pocket costs would rise substantially compared with Medicare.

Under UCC, her out-of-pocket costs would remain lower than under the ACA even if she doubled her earnings. She would have a far greater incentive to seek additional work.

In her NYT article, Goodnough notes that the current system is a source of social tension between the working middle class and the poor. Middle class families like the Hurds are sometimes resentful of those like DiCola, who from their perspective, do not enough effort to support themselves but get everything paid for by the government. UCC could ease the tension, both by leveling the playing field in terms of heathcare costs and by providing the poor with greater work incentives.

Based on a shorter version posted earlier on NiskanenCenter.org.

A rising tide lifts all boats, does it not? That cliché of economic policy is meant to highlight the ways in which economic growth, as a substitute for targeted social policies, can make life better not just for the privileged, but for the disadvantaged, as well. However, the cliché is misleading in that the causation is not all one way. A better social safety net can contribute to a stronger economy and faster growth of both actual and potential GDP.

A new report from the Congressional Budget Office provides some insights into one of the mechanisms linking social policy to growth, namely, labor force participation (LFP). Recent LFP trends in the United States have not been favorable to growth, but a close examination of the data suggests that better social policy, especially in the areas of income support, healthcare, and disability, could significantly improve participation. Increased LFP, in turn, would boost both actual and potential GDP, making room for additional monetary and fiscal stimulus.

Let’s look at some of the key findings of the CBO report. First, we find that labor force participation as a whole has declined since its peak in the early 1990s. As the following chart shows, LFP rates are expected to stabilize for men and increase slightly for women over the next decade, but not to return to their former peak values. (Gray bars denote recessions.)

In December, I wrote that the GOP tax bill could end up backfiring, not because of its effects on the structure of taxes, many of which were constructive, but because of bad timing. The fact that the bill cut total tax revenue just as the economy was approaching full employment made it highly procyclical. Standard principles of countercyclical fiscal policy call for tax cuts or spending increases as the economy moves into recession and tax increases or spending cuts as it moves toward full employment—a pattern that largely prevailed from the 1990s through 2014.

Fiscal policy since 2014 has been procyclical, and the spending deal now before Congress will make it even more so. The following chart updates one I posted in December. Its projections for 2018 are modified in two ways.

First, the CBO has revised its projection of the output gap for 2018 from -0.2 percent to +0.1 percent. The output gap measures the amount by which GDP exceeds or falls short of the level that the economy is able to sustain in the long run without excessive inflation.

Second, to reflect the impact of the new budget deal, I have changed the 2018 estimate for the structural deficit of the federal budget from -2.5 percent to -3.7 percent. The structural balance is the surplus or deficit that would prevail if the output gap were zero. When the economy slips into recession, the actual balance moves toward deficit because tax revenues automatically tend to fall and spending on unemployment benefits and other items tends to increase. The structural balance removes the effects of these “automatic stabilizers.” 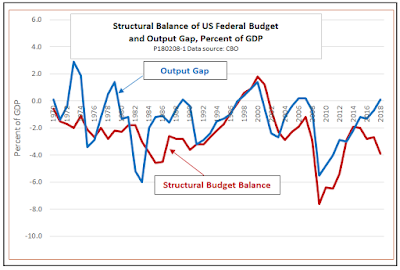 If the budget deal becomes law, the degree of fiscal stimulus, as measured by the difference between the output gap and the structural balance, will be the greatest since 1973, when the rate of inflation was 6.25 percent, rising to 11 percent in 1974 and followed by a recession. Optimists say there is less risk in “running the economy hot” now than in the 1970s because of hidden labor reserves that don’t show up in the official unemployment numbers and a productivity boom they expect because of cuts to taxes and regulations. Let’s hope they are right.

Writing in the New York Times, Peter Suderman, features editor at Reason magazine, urges Republicans to start over on healthcare:


If the halting, messy debate over legislation to overhaul health care has taught us anything so far, it’s that when it comes to health care, Republicans don’t know what they want, much less how to get it.

He suggests three principles to guide the rethinking process.

Second, any plan should include unification of our healthcare system, now a bewildering kludge that is fragmented among employer-based coverage, Medicare, Medicaid and the individual market.