Is There Any Real Political Appetite for Healthcare Reform?

Healthcare reformers spend a lot of time thinking about what a better healthcare system might look like, but they also need to pay attention to what kinds of reform, if any, people really want. The latest polling data from the Kaiser Family Foundation suggest that there is still a real appetite for reform, provided it is framed properly. Here are three key take-aways:

First, eighty percent of those who responded to the KFF poll think drug prices are unreasonable. Even though prescription drugs account for just 10 percent of U.S. healthcare spending, well behind hospitals, nursing homes, and doctors’ fees, doing something about drug prices beat out several other legislative priorities among those polled: 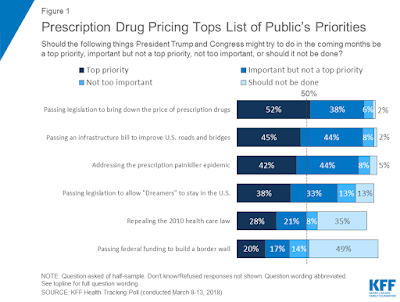 Second, views on drug pricing are less divided along party lines than are those on many other issues. For example, although Democrats and Republicans were widely split as to whether the NRA or labor unions had too much influence in Washington, their views on the influence of the drug companies were much closer. Three-quarters of Democrats and two-thirds of Republicans agreed that Big Pharma has too much clout in the nation’s capital. 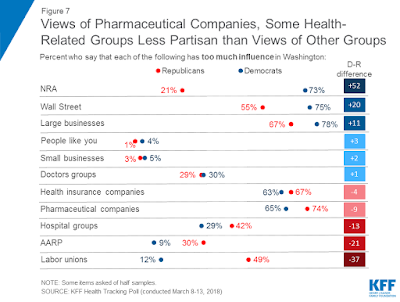 Third, views on drug pricing were not the only aspect of healthcare reform where there substantial cross-party agreement. Majorities of both parties—seven out of every eight Democrats and two out of every three Republicans—supported a national Medicare for All plan for people who wanted it, if those with other coverage could keep what they have. A different phrasing of the question, which implied an immediate switch to a single government-run plan for everyone, was much more divisive, drawing two-thirds support among Democrats but just one-third support among Republicans. 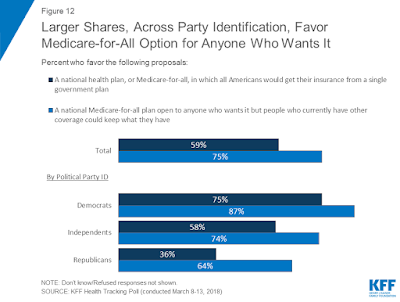 The implications for reformers are clear:

Reposted from NiskanenCenter.org
Posted by Ed Dolan at 10:45 AM No comments:

In public debate, progressives and conservatives often seem poles apart. Yet, behind the scenes, when pragmatic reformers take on a problem, their conclusions often converge, regardless of their political starting points. The Medicare Extra proposal recently released by the Center for American Progress (CAP) is a case in point. Filtering out any ideological language, Medicare Extra bears a strong resemblance to universal catastrophic coverage (UCC), an approach to healthcare reform that originated in conservative circles, but is now attracting wider attention. This post compares the two side by side.

The CAP bills Medicare Extra as an enhancement of traditional Medicare that would ensure that all Americans have healthcare coverage they can rely on at all times. It would cover a broad spectrum of healthcare needs, including dental, vision, and hearing care. Newborns, the currently uninsured, and people turning 65 would be enrolled automatically, while those who now have public or private coverage would have the option of enrolling.

In those respects, as well as in its name, Medicare Extra bears a strong resemblance to Senator Bernie Sanders’ Medicare for All. However, whereas Sanders’ plan would provide first-dollar coverage of healthcare spending for everyone, Medicare Extra builds in a substantial amount of cost sharing. Individuals and families with incomes below 150 percent of the federal poverty level (FPL) still get first-dollar coverage, but those with higher incomes would pay premiums according to a sliding scale that reached 10 percent of income for households at 500 percent of the FPL. Middle- and upper-income families would, in addition, face deductibles and copays. Those would be structured to give Medicare Extra policies an “actuarial value” sufficient to cover 80 percent or more of a household’s expected healthcare costs—the same standard of coverage as a gold plan purchased on today’s ACA exchanges.

Genetic testing renders many health risks uninsurable. For example, about 30,000 people in the United States have two copies of the gene that causes cystic fibrosis (CF). Treatment for CF is improving. The average lifespan for people with CF is now 37 years, but for an insurer, those are 37 years of costly treatment. New advances in gene therapy are likely to extend life further, but at even greater cost. Losses from CF are catastrophic, and, since genetic testing can diagnose CF even before birth, the loss is not unexpected or accidental. CF is thus uninsurable by traditional standards.

Single-gene genetic disorders like CF are fortunately rare, but new research by a team led by Lisa Bastarache of Vanderbilt University, published last week in Science, has the potential to greatly enlarge the number of people with uninsurable genetic risks. The authors used a large data base to identify cases in which the interaction of multiple genes produces diseases that are not as easy to spot as CF. They found 807 people with potentially dangerous genetic patterns among 21,701 that they screened. Only 8 of them had been previously diagnosed as being at risk of genetic disease.

A 100-fold increase in the number of people with potentially dangerous genetic patterns would be bad enough, but things might get even worse. Dr. Joshua Denny, one of the co-authors of the study, told the New York Times,


“I’m kind of surprised we found anything. The fact that we did means there’s maybe a lot out there that we don’t know.”

As improvements in genetic testing make the health risks of more people uninsurable in the commercial market, the case for guaranteeing access to health care by way of universal catastrophic coverage or something similar grows ever stronger.

Study of Urban vs. Suburban Emissions Strengthens Case for a Carbon Tax 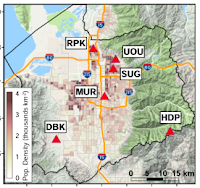 Environmentalists have long been critical of “suburban sprawl.” A study of carbon emissions in Salt Lake City and surrounding areas, published recently in the Proceedings of the National Academy of Sciences, provides new reasons to question excessive suburban growth. Although the study itself does not make policy recommendations, its findings bolster the case for a carbon tax.

The study was authored by Logan Mitchell of the University of Utah, together with twelve colleagues from various institutions. The authors note that although urban areas account for some 70 percent of global carbon emissions, gaps remain in the understanding of the spatial distribution of those emissions, in part because many monitoring stations are located far from cities. In this case, however, long-term observations were available from five urban and suburban sites in the Salt Lake Valley, plus a reference site in the nearby Wasatch Mountains.

These findings have clear implications for the choice between a market-based approach to carbon abatement vs. a command-and-control approach.

A carbon tax could incentivize greater urban population growth and less suburban expansion in two ways. First, it would increase the cost per mile of driving, thereby raising the cost of living farther from the urban core. Second, since urban residential buildings are more energy efficient than those in the suburbs, a carbon tax would increase the relative cost of heating and air conditioning in less densely populated areas.

In contrast, command-and-control environmental regulations would have less effect, or even perverse effects, on locational choices. For example, performance standards for furnaces and air conditioners raise the cost of building suburban homes but lower the cost of occupying in them. Their purpose is to nudge people to choose heating and cooling equipment that have lower long-run costs, but to the extent that they do so, they can reduce the long-run cost of suburban living not just in relative terms, but in absolute terms. Similarly, CAFE standards for automobiles increase the cost of new cars, but lower the marginal cost of driving an extra mile. Once a fuel-efficient car is in the driveway, they decrease the opportunity cost of a longer commute.

A shorter version of this post appeared on NiskanenCenter.org
Posted by Ed Dolan at 8:20 AM No comments: