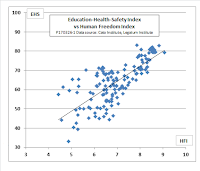 Economists, libertarian economists included, love to measure things. The Human Freedom Index (HFI) from the Cato Institute is a case in point. Its authors have assembled dozens of indicators of personal and economic freedom. They invite interested researchers to use them to explore “the complex ways in which freedom influences, and can be influenced by, political regimes, economic development, and the whole range of indicators of human well-being.”

I am happy to accept the invitation. This post, the first of a series, will take a first look at what we can learn from the data about the relationships among freedom, prosperity, and government. The relationships turn out to be not quite as simple as many libertarians might think.

In order to explore the way freedom influences other aspects of human well-being, I will draw on a third data set, the Legatum Prosperity Index (LPI) from the Legatum Institute. The LPI includes data on nine “pillars” of prosperity, including the economy, business environment, governance, personal freedom, health, safety and security, education, social capital, and environmental quality.
The EFI and PFI cover 160 countries and the LPI 149 countries. In this post I will use the set of 143 countries for which data are available in all three indexes. The Cato, Fraser, and Legatum links above provide detailed methodological information.

Hayek on Carbon Taxes: Markets without Prices or Prices without Markets?

As far as I know, Friedrich Hayek never wrote a word about climate change, but two of his most famous works contain arguments that bear directly on this key issue of environmental policy. Judging from what he wrote about the role of science in public policy and the use of knowledge in society, I think that if he had lived on into the twenty-first century, he might have supported a carbon tax.

Hayek’s 1945 article, “The Use of Knowledge in Society,” draws a distinction between two kinds of knowledge. One is “knowledge of the particular circumstances of time and place,” that is, knowledge that is widely dispersed among individuals, each of whom sees only a small part of the whole picture. The other is scientific knowledge, which, he says, we can reasonably expect to find in the possession of a suitably chosen body of experts.

Most of the article focuses on how best to make use of dispersed knowledge. However, near the beginning, Hayek comments briefly on the role of scientific knowledge:


It may be admitted that, as far as scientiﬁc knowledge is concerned, a body of suitably chosen experts may be in the best position to command all the best knowledge available— although this is of course merely shifting the difﬁculty to the problem of selecting the experts.

Hayek quickly moves on to his main subject, but he returns to the issue of scientific knowledge several years later.  In a 1960 essay, “Why I am Not a Conservative,” he explains the differences between the conservative worldview and that of “liberals,” a term Hayek uses in the European sense for what Americans would call classical liberals or libertarians. Liberals, he says, are prepared to come to terms with new scientific knowledge, whether they like its immediate effects or not. Conservatives, in contrast, are more wary of science:

High-risk pools have played a prominent role in the debate over U.S. health care policy, especially on the conservative side. In contrast to liberals, who lean toward a single-payer system or public option, conservatives would like to limit the government’s role to the very sick and the very poor. For the poor, they seem ready (grudgingly) to accepted Medicaid, or something like it, as long as coverage is limited to the “truly needy.” What to do about the very sick is a more complicated problem. High-risk pools, which both HHS Secretary Tom Price and House Speaker Paul Ryan have endorsed, offer a possible solution, but one that comes with issues of its own.

High-risk pools are a response to the inability of private companies to offer insurance at an affordable premium unless their pool of customers has enough healthy individuals to keep average  claims low. If too many sick people join the pool, claims and premiums, begin to rise. Rising premiums cause healthy people to drop out of the pool and take their chances on life without coverage. The dropouts push premiums higher still for those who remain in the pool until, eventually, no one can afford coverage. Economists call this phenomenon adverse selection. It is popularly known as a “death spiral.”

The traditional way of dealing with adverse selection was to practice medical underwriting, which means dividing the population into separate pools according to health status. If medical underwriting is permitted, insurers quote premiums that reflect the actuarial risk of each pool. They may refuse altogether to cover people with pre-existing conditions, cover them only at very high rates, or place caps on annual or lifetime benefits.

Although it keeps premiums affordable for the relatively healthy, medical underwriting inevitably means that some people cannot obtain coverage at an affordable premium, or have exhausted their coverage by reaching their spending caps. Before the Affordable Care Act (ACA or “Obamacare”) limited medical underwriting, many states created high-risk pools to meet their needs. Such pools were not intended to be profitable and were supported by government subsidies.
Described in this way, high-risk pools sound like a good compromise between the comprehensive government health care found in the rest of the developed world, and a purely market-based system that would make health care unaffordable for any but the healthy and the wealthy. What could go wrong? Several things, it turns out.

Universal Healthare Access is Coming to the US. Stop Fighting It. Make it Work.

Many observers are describing the dramatic failure of the American Health Care Act (AHCA) as a debacle, but perhaps it will prove to be a step forward. As everyone knows by now, the United States is alone among advanced economies in not having universal access to health care, but it is already much closer to such a system than most people realize. The defeat of the ACHA may be a tipping point in which the forces trying to figure out how to make universal access health care work gain the upper hand over those that are fighting it.

The true scope of government in our healthcare system

The term “single payer” is often used to describe the healthcare systems of other high-income countries. Although that is a convenient term, it is not entirely accurate. As the following chart of healthcare spending in OECD countries shows, all countries use a mix of private and public payments. Furthermore, even in many countries where the government share of spending is high, the actual administration of payments is split among several funds, trusts, or regional agencies. There are no countries where all health-related services, including optical and dental services, drugs, and long-term care, are entirely free to patients without co-pays or deductibles.  Healthcare systems of OECD countries also differ widely in such aspects as whether facilities are publically or privately owned, whether doctors are public employees or independent practitioners, and whether private provision of healthcare, in competition with public services, is encouraged or discouraged.