Universal Healthare Access is Coming to the US. Stop Fighting It. Make it Work.

Many observers are describing the dramatic failure of the American Health Care Act (AHCA) as a debacle, but perhaps it will prove to be a step forward. As everyone knows by now, the United States is alone among advanced economies in not having universal access to health care, but it is already much closer to such a system than most people realize. The defeat of the ACHA may be a tipping point in which the forces trying to figure out how to make universal access health care work gain the upper hand over those that are fighting it.

The true scope of government in our healthcare system

The term “single payer” is often used to describe the healthcare systems of other high-income countries. Although that is a convenient term, it is not entirely accurate. As the following chart of healthcare spending in OECD countries shows, all countries use a mix of private and public payments. Furthermore, even in many countries where the government share of spending is high, the actual administration of payments is split among several funds, trusts, or regional agencies. There are no countries where all health-related services, including optical and dental services, drugs, and long-term care, are entirely free to patients without co-pays or deductibles.  Healthcare systems of OECD countries also differ widely in such aspects as whether facilities are publically or privately owned, whether doctors are public employees or independent practitioners, and whether private provision of healthcare, in competition with public services, is encouraged or discouraged. 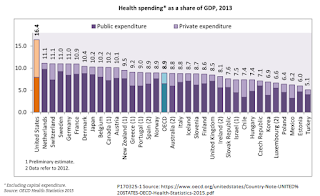 In the United States, as elsewhere, even the public healthcare sector is not a true single-payer system. The federal government already operates three large systems: Medicare, Medicaid, and the Veterans Administration. Each of the first two is comparable in size to the entire healthcare systems of most European countries. If we categorize healthcare expenditures by the type of primary payer, the three big federal programs accounted for roughly a third of all spending in 2015, according to data from the Centers for Medicare and Medicaid Services. 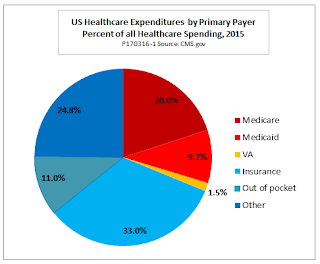 However, this perspective understates the extent of the government role in U.S. healthcare. If we categorize expenditures by the source of the funds (instead of the type of payer) the government share of spending is much larger. This is partly because state and local governments account for 17 percent of all healthcare spending, which is not fully reflected in the chart above. Also, that chart hides the extent to which federal tax expenditures finance much of our ostensibly private health insurance. According to data from the Tax Policy Center, deductions and exclusions of health insurance premiums and related tax breaks cost the federal government some $250 billion in revenue in 2015 — a substantial burden on the federal budget.

Deductibility of employer healthcare expenditures accounts for about three-fifths of total tax expenditures. Others include exclusions of Medicaid benefits from declared income, deductibility of insurance for self-employed individuals, tax breaks for some types of out-of-pocket costs, and other items. If we categorize healthcare expenditures according to the ultimate source of funds rather than the primary payer, we find that government budgets account for over half of all spending, as this chart shows: 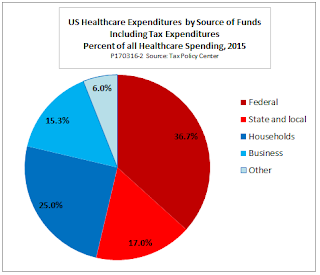 Both the Affordable Care Act (ACA or “Obamacare”) and the AHCA tried to salvage what is left of private healthcare finance. Yet its two pillars, employer-sponsored insurance and individual insurance plans, are beyond saving.

The individual insurance market is failing because too large a share of health care risks is inherently uninsurable. Two conditions must hold for a real insurance market to work. First, the risks in question must be fortuitous; that is, predictable statistically but not predictable for any particular individual. Second, premiums must be high enough to cover claims and administrative expenses, yet still affordable to the customer.

Neither condition holds for individual health insurance. The principal reason is that a tiny share of the population accounts for the great bulk of all healthcare spending. The next chart, based on data from the Kaiser Family Foundation, shows that the top 10 percent of households account for two-thirds of all personal healthcare spending, and the top 5 percent for half of all spending. The majority of these high spenders have one or more chronic conditions that keep their spending high year after year. 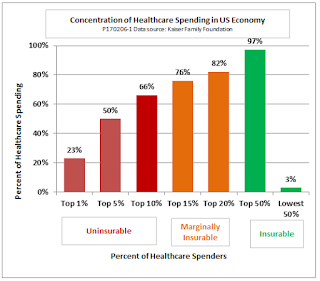 The skewed pattern of spending poses a dilemma for policymakers: If they allow insurance companies to refuse to issue policies to people with pre-existing conditions, the people most in need of medical care will not be able to buy policies. If they insist on guaranteed issue, then the presence of high spenders in the risk pool pushes up premiums for everyone. As that happens, relatively healthy people drop out of the pool, pushing claims and premiums higher still for those who remain. As losses mount, insurers begin to drop out, too, until the system collapses.

Both the ACA and the ACHA opted for guaranteed issue. That sounds good politically, since many of us know a neighbor or relative with a pre-existing condition even if we don’t have one ourselves. Ultimately, though, guaranteed issue is an unsustainable policy that threatens the whole individual insurance market with a “death spiral.” The ACA is already showing early signs of such a spiral, and, as I explained in this earlier post, the ACHA seemed designed to make things worse rather than better.

Meanwhile, employer-sponsored health insurance has problems of its own. First, it works much better for large corporations than for small businesses. Most small firms simply do not have enough employees to constitute an affordably insurable risk pool. Second, economists believe that over time, employees end up bearing the cost of healthcare benefits through lower pay. Rising employer healthcare costs are thus a major contributor to the stagnation of wages. Third, the fear of losing insurance coverage makes people reluctant to give up jobs that are otherwise unsuitable—reluctant to try something new or start a business of their own. This “job lock,” in turn, reduces labor mobility and makes the economy less able to respond to shocks from new technologies and changing patterns of trade.

For these reasons, job-linked health insurance has been gradually dying for some time now. According to another report from the Kaiser Family Foundation, from 1999 to 2014, the share of the nonelderly population covered by employer-sponsored insurance fell from 67 percent to 56 percent. If the ACHA had passed, its repeal of the ACA’s employer mandate would have locked in the downward trend.  The Congressional Budget Office estimated that over ten years, 7 million employees would have lost employer-sponsored insurance as a result of the AHCA.

Despite the best of intentions, the ACA has been unable to save private-sector health insurance in either its individual or employer-sponsored form. The AHCA, the only alternative Republicans could offer, would only have accelerated the decline. That leaves two possibilities. Either the share of the population without effective access to the healthcare system will begin to rise again, or the government share of the national healthcare budget will continue to grow.

Decreased access may be the outcome in the short run. Republicans may make another attempt at reform that saves money through reduced coverage, but even if they abandon that legislative path and leave the ACA as the law of the land, its prospects are not good. Even with the greatest administrative energy behind it, it would be hard to make the ACA’s private insurance market work well, and it is more likely that current administrators will work to undermine than to support its operation.

In the long run, however, collapse of the ACA is unlikely to prove politically acceptable, once it actually starts to hit home. Looking at CBO projection of decreased coverage is one thing; waking up in the morning to find that Aunt Sally can’t get her chemo or Uncle John can’t get his bypass surgery is another thing altogether. At that point, some form of universal healthcare access, whether we call it single payer or something else, will be the only option left.

And really, it is not such a bad alternative. A revealing report from the Commonwealth Fund ranks U.S. healthcare eleventh out of eleven against those of ten high-income countries, all with systems that offer universal access. U.S. healthcare is at the top in terms of cost, and at the bottom in terms of efficiency and equity. And no, contrary to the scare stories, other countries do not use death panels or endless waiting periods to ration care. The United States ranks in the middle of the pack on measures of timeliness of care, although it is the worst of the eleven in terms of cost-related limitations on access.

So get used to it. We, too, could free up a good chunk of our national income now spent on healthcare, reduce medical insecurity, and cut the high administrative costs of our fragmented and overlapping healthcare systems. Universal healthcare access is coming. Stop fighting it and start figuring out how to make it work here, as it does elsewhere.

This post includes material first published on the website Fabius Maximus.
Posted by Ed Dolan at 4:34 AM