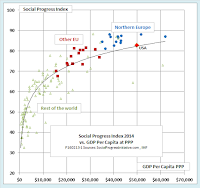 Here is a chart that gives the big picture. The horizontal axis shows GDP per capita. (GDP here is measured at purchasing power parity (PPP) to remove distortions caused by over- or undervalued exchange rates.) The vertical axis shows a measure of human wellbeing called the Social Progress Index (SPI). Unlike some other broad indexes of human welfare, the SPI does not explicitly include income, wealth, or GDP. Instead, it regards them as “inputs” that support the production of “outputs” like health, security, and personal freedoms. >>>Read more
Posted by Ed Dolan at 6:38 AM 4 comments:

Sanders is Right: Why We Should Break Up the Big Banks

The presidential campaign has brought new attention to the problem of banks that are too big to fail (TBTF).

The major candidates disagree, not on whether the largest banks are too big to fail, but on what to do about it. Senator Bernie Sanders has made breaking up the banking giants a centerpiece of his campaign. Hillary Clinton favors a continuation of the regulatory approach embodied in the Dodd-Frank Wall Street Reform and Consumer Protection Act of 2010. The GOP candidates favor an approach that combines deregulation with market discipline.

Sanders' anger at the banks seems to resonate well with voters, but influential voices in the media skeptical. The Editorial Board of the Washington Post has argued against breaking up the big banks. The New York Times has done likewise, prominently featuring an opinion piece written by Steve Eisman, a managing director of the investment firm Neuberger Berman. Politico also thinks breaking up the banks would be a bad idea.

I find the arguments of these critics unpersuasive. In what follows, I will examine the three approaches to dealing with the problem of TBTF and explain why I think Sanders is right to think that a reduction in the size and influence of the largest banks should be a part of any comprehensive plan to improve the stability of the financial system. >>>Read more
Posted by Ed Dolan at 4:23 AM No comments: