How Occupational Licensing Undermines Labor Fluidity, and Who is to Blame

A healthy economy requires a fluid labor market. Even when total employment and output are stable, the labor market is in constant motion. Jobs disappear when firms close or downsize. Other jobs appear when new firms open or old ones expand. People move freely from one job to another in search of career advancement or better fit between their work and their personal lives.

Unfortunately, the US labor market is becoming less fluid. We can trace part of the decrease in fluidity to outside factors like an aging labor force and changing business practices, but much of it stems from ill-considered labor market policies. Of these, one of the most damaging is the spread of occupational licensing over recent decades. As we will see, Democrats and Republicans share the blame.

How can we measure labor fluidity and why do we care?

A paper by Stephen J. Davis of the University of Chicago and John Haltiwanger of the University of Maryland  charts the decline in US labor market fluidity. Using data on quits, layoffs, and job openings from the Bureau of Labor Statistics, supplemented by other data sources, the authors construct three fluidity indicators:
The following chart from Davis and Haltiwanger shows that all three measures of fluidity have been decreasing in the United States. Their paper includes many more charts showing decreases in other measures of fluidity, decreases in underlying indicators like quits and hires, and decreases by state and demographic group. The decreases in fluidity have been widespread, but they appear to have affected men more than women and less educated workers more than those with college educations. Key aspects of the decline in labor fluidity appear to be unique to the United States, or at least more pronounced here than in other advanced economies. 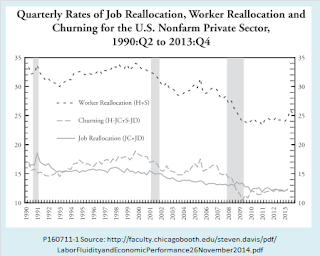