Why Does Big Business Fear Trump?

It is not surprising that there is little love for Donald Trump’s presidential candidacy among the leaders of top US multinational corporations. Why then, asks Andrew Ross Sorkin of the New York Times, do they not speak out? Why do they quickly follow up their private comments with, “I could never say that on the record”? I find some of the views reflected in Sorkin’s article disturbing.

The attitudes of top executives would be more understandable if they centered on the issue of free trade, but they do not. Yes, big business has profited from past trade deals and backs new ones like the TPP and TTIP, which Trump promises to cancel. But Trump’s Democratic opponent and a majority of Congressional candidates from both parties have also joined the anti-trade bandwagon, so trade policy is in for a change no matter who wins this election. As Trump himself would say, there’s something else going on.

Trump the bully is one broader fear of the executive class. Sorkin quotes Reid Hoffman, co-founder of LinkedIn, who was one of the few willing to speak to him on the record:


People are fearful that, especially in a circumstance where he might be in a position of extreme power as a potential presidential candidate, that would be used in a retaliatory way, that would be used in vengeful way. Everyone gets worried about being attacked, and part of the logic and mechanics of bullies is that they cause people to be fearful that they’ll be singled out and attacked.

It’s the same thing like on school grounds, when people won’t go help the kid who is being bullied because they’re worried that the bully will focus on them.

Yes, it is frightening to think about the ways a thin-skinned and vengeful President might misuse the office. The entanglement of corporations with government is such that there would be many opportunities to punish enemies. Taxes, regulations, and government contracts would be some of the most direct, but backdoor methods like planting rumors or leaking documents might be easier, and just as damaging. A President Trump might install a compliant security chief who would give him access to a company’s internal phone and email communications, encrypted or not. The tools at the disposal of a spiteful president would make something like closing a bridge look like a playground prank. 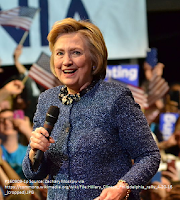 Hillary Clinton is often said to be a policy wonk, deeply enmeshed in specifics and details, but that may be a mischaracterization. In some ways, her approach seems disturbingly superficial, skipping one perceived problem to another with little attention to their underlying causes. In some cases, Clinton seems to have paid little attention to the unintended consequences of her proposals, as a real policy expert would do. A look at the tax implications of some of her social policy proposals will illustrate these shortcomings.

Discussions of by both supporters and critics have characterized Hillary Clinton’s tax policies as progressive. The appearance of progressivity arises from her pledge to raise tax rates and close loopholes for the wealthiest Americans, while leaving nominal tax rates for middle-class families largely unchanged. According to an analysis by the Tax Policy Center, her proposals would increase revenue by $1.1 trillion over the next decade, with nearly all of the tax increases falling on the top 1 percent.

However, the conclusion that Clinton’s policies would have little effect on middle-class families is based on a narrow view of taxes—one that takes into account only the money that taxpayers hand over to the IRS. Economists have long favored a broader concept called the effective marginal tax rate (EMTR), which includes reductions in government benefits that occur as income rises as well as increases in taxes paid. Some little-noticed features of Clinton’s education and healthcare policies would have the unintended consequence of raising effective marginal tax rates on middle-class families to levels far above those that top earners would face.