Is the Chained CPI the Right Fix for Social Security?

One of the most controversial elements of President Obama’s 2014 budget is the proposal to reduce future cost-of-living adjustments to Social Security benefits by changing the inflation index. The Social Security Administration now bases inflation adjustments to on the consumer price index for urban wage earners and clerical workers (CPI-W), a close cousin of the more widely publicized CPI for all urban consumers (CPI-U). The administration proposal would instead use a relatively new index called the chained CPI, or C-CPI-U, which, in the past, has increased slightly less rapidly. Predictably, deficit hawks love the idea, while seniors and those who defend their interests hate it. Suppose, though, that we set ideology and interest group politics aside to look at the underlying economics of the issue. On those terms, is the switch to the chained CPI the right fix for Social Security? >>>Read more
Posted by Ed Dolan at 6:33 AM No comments:

US GDP growth accelerated from a crawl to a walk in the first quarter of 2013, according to the advance estimate issued today by the Bureau of Economic Analysis. The reported annual growth rate of 2.5 percent was just a bit faster than the average rate during the recovery, and much stronger than the 0.4 percent reported for Q4 2012. Compared with yesterday’s news that the British economy had barely escaped a triple-dip recession and that unemployment hit a record high in Spain, the latest numbers position the United States as one of the healthiest of the advanced economies. Behind the headline growth rate, however, some of the details were less encouraging.

Personal consumption expenditure was the most important component of the acceleration. Consumption contributed 2.24 percentage points to the Q1 growth rate, compared to just 1.28 percentage points in Q4. Nearly all of that came from the service sector. Housing services and utilities, recreation, and financial services all showed strong gains. Growth in consumption of goods slowed slightly. >>>Read more

Follow this link to view or download a classroom-ready slideshow with charts and commentary on the latest GDP data
Posted by Ed Dolan at 10:16 AM No comments: 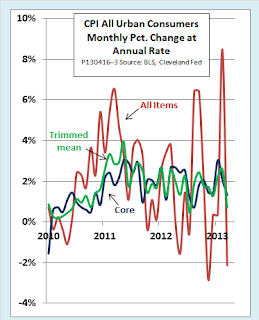 Follow this link to view or download a classroom-ready slideshow with charts of the most recent inflation data.
Posted by Ed Dolan at 4:19 PM No comments:

Slovenia isn't Cyprus, but that doesn't Mean it's Not in Trouble

Leo Tolstoy wrote that all happy families are alike, but each unhappy family is unhappy in its own way. Much the same is true of economies. Maybe that was what EU Commission President Jose Barosso had in mind when he said recently that, “it is a completely different situation in Cyprus and in Slovenia.” Different, but in many ways no less dangerous. For those struggling to keep up with the ever-evolving euro crisis, here are some of the key ways in which the impending crisis in Slovenia differs from—and resembles—the others.

As in many other countries, the crisis in Slovenia, which now centers on the banking system, has developed against a background of broader macroeconomic problems. Not long ago, Slovenia’s economy was doing well. The country was one of the ten that entered the EU in 2004. Like others in its cohort, it initially enjoyed rapid economic growth. The following chart, which compares Slovenia’s economic growth since 2000 with selected other countries, shows that before the global financial crisis, Slovenia looked a lot like Poland, one of the EU’s biggest success stories. Since the crisis, it has looked more like Portugal.

What accounts for the shift from success story to problem case? Although many factors were at play, two were especially significant. >>>Read more
Posted by Ed Dolan at 6:51 AM 1 comment:

The White House has officially unveiled its budget for fiscal year 2014. I hope to have a chance to look at some of the numbers and programs in depth over the coming weeks, but the overview alone confirms what many leaks have suggested, namely, that this is a disappointing, highly politicized document. Here are some first impressions:

A commitment to continued procyclical austerity

The first thing the proposal makes clear is that the White House has joined Congressional Republicans in a bi-partisan commitment to austerity. It promises $1.8 trillion of additional fiscal consolidation over 10 years, in addition to $2.5 trillion already achieved, about the same as the GOP is looking for. The only difference is a fig leaf’s worth of proposed new revenue in the White House version, $1 for each $2 of spending cuts.

Under the proposal, federal tax receipts would reach 20 percent of GDP by 2020, about same as would have been allowed by such conservative initiatives as a balanced budget amendment proposed last year by Sen. Orin Hatch. True, some Republicans have held out for a still lower target, but even capping tax receipts at 20 percent of GDP would, in view of the demographic realities of an aging population, mean a much smaller government than Americans have become accustomed to during most of the post-World War II period. (See here for some relevant charts.)

The path of fiscal policy under the budget proposed by the White House continues the procyclical pattern that has prevailed for most of the past decade. A countercyclical policy would move the structural balance (that is, the surplus or deficit adjusted to take account the state of the business cycle) toward deficit when the economy is operating below its potential and toward surplus only after it approaches or reaches full employment. Instead, the pattern since 2010, and continued under the budget plan, is exactly the opposite.>>>Read more
Posted by Ed Dolan at 10:12 AM No comments:

The U.S. economy created a disappointing 88,000 payroll jobs in March, according to today’s report from the Bureau of Labor Statistics. That was down sharply from the 268,000 gain in February. The unemployment rate fell to 7.6 percent, a new low for the recovery, but even that was largely due to a drop in labor force participation.

Why Hasn't the US become another Greece?

How many times have we heard the warning that if the government in Washington doesn’t change its ways, the United States could become another Greece? Three years ago, when the crisis in Greece was just getting underway, I wrote a post making some comparisons between Greek and U.S. fiscal performance, along with a separate slideshow that presented a supporting set of charts. One key chart showed the two countries’ fiscal balances moving in an ominously parallel pattern that suggested that the United States might be about to follow Greece down the fiscal drain.

Last week, a reader who had run across the old slideshow scolded me for having been an alarmist. While the crisis in Greece has morphed from a crisis into a disaster, he pointed out, the U.S. economy has gradually recovered and its fiscal balance has improved markedly. Why? What were the key factors that made the difference? >>>Read More