Exit polls from the recent midterm election suggest over 40 percent of voters consider health care as the top issue facing the country. Yet after a unified Republican government tried and failed to repeal and replace the Affordable Care Act, the conservative vision for health care reform remains something of an open question.

Here at the Niskanen Center, senior fellow Ed Dolan has been beating the drum for the reform path known as Universal Catastrophic Coverage (UCC) for more than two years. But not everyone agrees. That’s why we invited Chris Pope, a senior fellow of the Manhattan Institute and formidable conservative health care policy thinker, to join Ed Dolan in a debate.

Be it resolved:
Universal catastrophic coverage is a reasonable path to universal and affordable health care.

People have many basic needs, including food, shelter, education, and access to health care, which, if unsatisfied, can make our treasured rights to life, liberty, and pursuit of happiness meaningless. Of these, health care poses unique problems for public policy.

To understand why, imagine a society in which no one’s resources fall below the poverty level. Regardless of whether those resources come from a state-sponsored universal basic income or from some combination of work, family support, and private charity, I argue that such a society could adequately meet needs for food, shelter, and so on but not health care.

There are two reasons for that. One is the highly skewed distribution of the demand for health care services. In the United States, the healthiest half of the population account for just 3 percent of services consumed, while the sickest 5 percent account for 50 percent. For comparison, if the need for food were distributed similarly, half the population would need just 120 calories in their daily diet (one small potato), while the hungriest 5 percent would starve on anything less than 20,000 calories (35 Big Macs). For the top 5 percent, health care consumption exceeds the national median income.

The second reason health care is unique is its uninsurability. To be commercially insurable, a risk must be unpredictable and an actuarially fair premium must be affordable to the insured. Because of pre-existing conditions and advances in genetic testing, health risks are highly predictable. As a result, for many risk-prone individuals, actuarially fair premiums can exceed income.

The combination of skewed need for services and uninsurability means there is no simple market mechanism that would give everyone access to health care. That leaves us either with a nation of medical haves and have-nots, or a major role for government.
Read more »
Posted by Ed Dolan at 11:27 AM 4 comments:

How should would-be reformers interpret these numbers? Clearly, one possible reaction is, “If it ain’t broke, don’t fix it.” The Affordable Care Act took that approach. Rather than trying to replace ESHI, it made it mandatory for employers with 50 or more workers.

Despite its popularity, though, serious health economists tell us that ESHI is “broke,” after all. No comprehensive reform can succeed unless it is phased out. This commentary examines three of ESHI’s biggest problems: job lock, which reduces labor mobility for ESHI beneficiaries; the fundamental inequity of the way the benefits of EHSI largely accrue to the highest -paid workers; and the increased fragmentation of health care finance inherent in a system administered by thousands of separate employers. We conclude with a plan for phasing out EHSI in a way that can fix these problems while minimizing the disruption for workers who are satisfied with their current coverage.

A Coasean Rationale for a Carbon Tax

This policy analysis develops a rationale for a carbon tax based on two key insights from the work of Ronald Coase.

The first insight is that problems of pollution should not be viewed simply as situations in which A harms B, so that A should be restrained with a tax, a suit for damages, an injunction, or a regulatory prohibition. Instead, they should be seen as coordination problems in which the plans of two parties conflict. Reaching optimal coordination typically requires action by both parties. Those will usually include both action by polluters to cut emissions (abatement) and action by pollution victims to reduce harm (adaptation). Putting too much of the burden of coordination on either party is inefficient.

The second insight is that a complete analysis must take into account the direct costs of abatement and adaptation, but also the transactions costs of achieving coordination. Transactions costs include the costs of identifying victims and sources of pollution, assessing damages, reaching agreements on actions to be taken, and enforcing those agreements once they are in place. In some cases, superficially attractive policy solutions turn out to be unsuitable because of their high transaction costs.

The analysis uses the example of coastal flooding caused by climate change as a case study in coordination. The polluters are fossil fuel burning power plants and the victims are coastal property owners. The former have a number of abatement options, including fuel switching and carbon capture, while the latter have abatement strategies that include building sea walls, improving construction, and retreating to higher ground. Following Coase, a full range of policy options are examined for their impact on the behavior of both polluters and pollution victims. When all aspects of the coordination problem are considered, including transaction costs, carbon taxes emerge as an attractive mechanism for dealing with climate change. 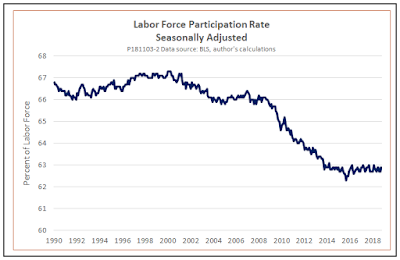 What is going on here? Isn’t the stagnation of labor force participation just a sign of the aging of the U.S. population? Yes, at least in part. The next chart shows labor force participation for prime-age workers only, aged 25 to 54. that rate has turned up sharply since hitting a low of 80.6 percent in September 2015. The flat trend of the overall participation rate simply means that an increase in the average age of the civilian labor force, which includes retirees, has offset higher participation by people in the working age population.
Read more »
Posted by Ed Dolan at 8:08 AM No comments: