In a recent White House meeting with President Asif Ali Zadari of Pakistan, US President Barack Obama underscored the importance of the US-Pakistani relationship and emphasized continued US support for the country. Unfortunately, the prospects for a payoff to US strategic commitments in Pakistan remain clouded by deep economic weaknesses that have their origins as much in demographics and political factors as in the more widely publicized natural disasters and security issues.

Just a few years ago, Pakistan's future looked brighter. Its economy seemed to be taking off after years of stagnation. The World Bank was applauding wide-ranging economic reforms. As the chart shows, in the mid-2000s it looked as if Pakistan might be capable of playing in the same league as neighboring India and China. Since then, however, things have fallen apart. The global economic crisis is only partly to blame. More fundamental problems are preventing the kind of recovery that other emerging markets are experiencing. 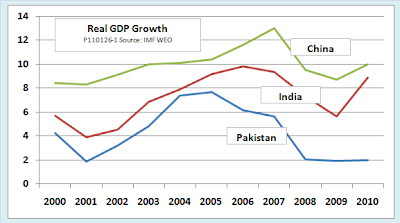 Demographic factors play a big role in Pakistan's problems. According to UN data, the country has a population growth rate of 2.13 percent, compared to 1.27 percent in India and .61 percent in China. True, as the late Julian Simon was fond of pointing out, people are a country's most important resource. A large or growing population by itself does not necessarily mean a weak economy. But more people are a source of prosperity only to the extent that they are engaged in productive activity. Pakistan scores poorly in that regard.

These demographic factors reinforce one another to create a vicious cycle. A high fertility rate keeps women out of the labor force. If women are not expected to enter the labor force, there is less incentive for families to send them to school. And women with less education tend to have more children.

In principle, well conceived pro-growth policies could go a long way toward offsetting all of these handicaps. However, implementing such policies would require a government capable of rising above short-term electoral politics and taking hard decisions with longer-term payoffs. Unfortunately, Pakistan does not have such a government.

The events of early 2011 are a case in point. Under international prodding,  the government advanced a promising set of reforms. Key measures were a restructuring of the country's weak tax system and big cuts in energy subsidies, which together would have reduced a huge budget deficit (now over 5 percent of GDP) and helped to bring inflation (now at 15 percent) under control. Unfortunately, Pakistan's fragile governing coalition chose just that moment to collapse. Although the planned economic reforms were not the only cause, it proved necessary to abandon them in order to restore a workable parliamentary majority.

For the time being, it seems that non-economic issues like the country's draconian blasphemy laws are sucking away all of the political oxygen, to the frustration of the many capable technocrats in the government. Molly Kinder of the Center for Global Development puts it this way: "Time and again, the documents cite the same problems, the donors recommend the same solutions, the government of Pakistan promises to implement the same reform, the government breaks (and donors lament) the same promises.  And the cycle repeats."

None of this is meant to belittle the effects of last year's devastating floods or Pakistan's appalling security situation. Those are real problems. The point made here is that Pakistan would be in bad shape even without them. Real GDP is barely keeping up with population growth, and in some years not even that. Meanwhile, what should be done about the $10 billion or so of US and IMF aid that is in the pipeline? Do US taxpayers and other donors really just want to watch it trickle away into the sand, with little prospect of payoff either for the people of Pakistan itself or for those who like to view it strategic ally?

Follow this link to view or download a short slideshow with additional details on Pakistan's economy.
Posted by Ed Dolan at 9:36 PM