If a Stronger Yuan is Good, Can A Weaker Dollar be Bad?

One of the top themes for 2010 in economics, politics, and diplomacy was the damage being done to the U.S. economy by an undervalued Chinese yuan. As the yuan began to appreciate in the second half of the year, slowly in nominal terms but more rapidly in real terms, everyone cheered. At the same time the yuan appreciated, the dollar depreciated, not just relative to the yuan, but to all foreign currencies on average. The broad weakness of the dollar was welcomed much less enthusiastically. Words like "unpleasant" and "grim" tended to be used instead.

So what gives? If a stronger yuan is good, can a weaker dollar really be bad?

It is easy to understand why appreciation of the yuan has been so widely sought and so well received. A weak yuan makes it hard for U.S. manufacturers of toys, shoes, and solar panels to compete with imports from China, and for U.S. exports of goods and services to penetrate Chinese markets. That, in turn, puts downward pressure on U.S. wages as employers struggle to cut costs and stay in business. Yuan appreciation takes some of the pressure off. It is even more welcome at a time when there is already so much slack in the U.S. economy.

Of course, the yuan is not the only currency out there. If it appreciated while other exchange rates stood still, not many of those toy and T-shirt jobs would come home. Importers would just find new sources in Bangladesh, or Vietnam. Trade deficits and political tensions would increase with those countries and there would be calls for them, too, to realign their currencies.

Fortunately for those who look after the interests of U.S. exporters and import-competitors, the yuan-dollar relationship has not moved in isolation. Instead, the dollar has depreciated across a wide front. The broadest measure of the trend is the real effective exchange rate (REER), which is a weighted average of a country's exchange rate relative to the currencies of all its trading partners, adjusted for differences in national rates of inflation. As the following chart shows, by the end of 2010 the dollar's REER reached a low point for the decade. The weak dollar contributed to a healthy 14 percent growth in U.S. exports (based on data through October). Interestingly, that 14 percent is right on track with the president's National Export Initiative, which aims to double exports over five years. 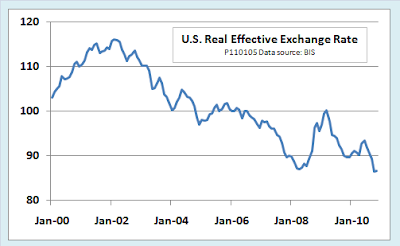 Of course, there are downsides to the dollar's weakness. The chief one is an increase in the cost of imports. In part, that means toys and T-shirts cost more at Wal-Mart. At the same time, it means the dollar costs of imported raw materials, from oil to neodymium, also rise. As high import costs pass through wholesale and retail markets, dollar depreciation puts upward pressure on the rate of inflation.

But even the inflationary impact of the weak dollar is not entirely unwelcome at present. U.S. inflation, whether you measure it by the consumer price index, the personal consumption expenditure core deflator, or whatever, is well below the 2 percent or so that is widely thought to be consistent with a healthy economy. In a heroic attempt to get the inflation rate back up to target, the Fed has undertaken a program of quantitative easing in the form of massive purchases of Treasury securities. Although for diplomatic reasons the Fed is reluctant to say so, dollar depreciation is one of the channels through which quantitative easing is supposed to work. For that reason, a bit of depreciation-induced inflation is actually welcome at the moment.

It would be nice to end this post with a confident prediction about the dollar's exchange rate in the coming year, but I cannot. There are too many uncertainties, the future direction of U.S. fiscal and monetary policies being among the greatest. Instead, I will end with a more modest reminder: Exchange rate changes always produce both winners and losers, but the balance between the gains and the losses can vary according to circumstances. At the moment, and with the proviso that last year's gradual adjustments do not turn into a rout, both a stronger yuan and a weaker dollar are more to be welcomed than lamented.