The Impossible Trinity, or, Why Latin America Hates QE2

Latin America is up in arms over QE2. Brazil's finance minister, Guido Mantega, sees the Fed's program of quantitative easing as a form of currency manipulation on a par with China's efforts to maintain an undervalued yuan. We hear dark talk of currency wars and threats to raise the issue with the G20, the WTO, and anyone else who will listen. Why all the anger directed against what most people in the United States view as a purely domestic policy that hopes to reboot a sluggish recovery? Why wouldn't that be welcomed by US trading partners in Latin America and everywhere?

Part of the answer is that in today's world, there is no such thing as purely domestic monetary policy. Actions of the central banks even of small countries send out little ripples through the global financial system. Those of major central banks can send out big waves.


QE2 is a case in point. Under that program, the Fed plans buy some $600 billion worth of longer-term Treasury securities by the middle of this year. Operationally, the policy is purely domestic; both the assets and liabilities it adds to the Fed's balance sheet are denominated in dollars. In that sense, QE2 is quite different from what the Chinese central bank does when it buys dollars in exchange for yuan. Nonetheless, the Fed's actions do affect the world economy.

One reason is that when the Fed buys Treasuries, it reduces the stock of those securities in the hands of the public. Other things equal, that tends to raise their prices and reduce their yields. In practice, the effects have been a little messier. Treasury yields fell when the idea of QE2 was first floated in August, but since the purchases actually began, they have risen again. In a recent speech, Fed Vice-Chair Janet Yellen argues that yields, although higher than they were, are lower than they would have been without QE2. Some people believe the models on which that conclusion is based, and some are skeptical. Latin American finance ministers seem to be among the believers.

Beyond that, when the Fed pays for the Treasuries it acquires, its liabilities, in the form of bank reserve deposits, increase by the same amount. To the extent that banks want to put the new reserves to work by lending them out or investing them, there is additional downward pressure on interest rates. True, because banks are not currently putting all their reserves to work, this effect is weaker, but it is still there. At the very least, the growing mass of excess reserves overhanging financial markets affects expectations.

That would be the end of the story if the United States were a closed economy, but it is not. With QE2 putting downward pressure on interest rates across a broad front, some investors who currently hold dollars are going to start looking for better yields abroad. At that point, the ripples from QE2 begin to affect Brazil, Chile, and other economies that offer attractive investment opportunities. The exact form taken by the external effects of QE2 will differ according to the policies each country pursues regarding exchange rates and international capital flows. We need to consider three possibilities.

First, suppose a country has a freely floating exchange rate and open capital markets. If so, increased financial inflows will put upward pressure on the exchange rate. Exchange rate appreciation is beneficial to importers and consumers of imported goods, but harmful to exporters and to local manufacturers that compete with imports. If exporters and import-competing manufacturers are disproportionately influential in government, as is often the case, the political reaction to currency appreciation will be more negative than positive.

Suppose, instead, that a country has opted for a fixed exchange rate but still maintains an open capital account. In order to  hold the exchange rate steady, the central bank will have to counteract increased financial inflows by purchasing foreign currency and adding it to its international reserves. Each dollar added to reserves must be paid for with newly issued domestic currency, pumping new liquidity into the domestic banking system. The resulting increase in lending and spending create inflationary pressure. As long as the nominal exchange rate is held constant, inflation undermines the country's competitiveness, or, to put it another way, causes its currency to appreciate in real terms. Exporters and import-competing manufacturers are harmed by real appreciation that takes the form of a stable nominal exchange rate plus inflation just as much as they are harmed by nominal appreciation without inflation.

There is one other possibility: A country can fight both nominal currency appreciation and inflationary increases in the domestic money supply by closing its capital account to unwanted financial inflows. However, that option, too, has its drawbacks. Closing a country's capital account to financial inflows can cut off much needed sources of credit to domestic consumers and industry, thereby slowing the economic growth. Stability is then gained only at the cost of isolation and stagnation. On the whole, orthodox economics has frowned at restrictions on international financial flows.

Of course, just saying something is impossible does not mean no one will try to find a way around it. Brazil, Chile, and some similarly affected countries elsewhere are pursuing blended policies that strike compromises among the three elements of the impossible trinity.

One approach is to impose partial capital account restrictions designed to filter out destabilizing, short-term "hot money" while allowing growth-enhancing, long-term direct foreign investment. Examples are Chile's requirement that investors make interest-free deposits at the central bank and Brazil's measures to curb short-selling of the dollar. Such limited controls are gradually gaining acceptance even by institutions like the IMF, which has discouraged them in the past. However, doubts persist on their effectiveness in the long run, and international treaties are thought to pose barriers to more comprehensive capital controls.

Sterilized foreign exchange intervention is another compromise approach. A central bank is said to sterilize when it buys foreign currency to slow nominal appreciation, but neutralizes the inflationary monetary effects by financing the forex purchases with sales of long-term bonds or other non-monetary financial instruments. However, sterilization also has its drawbacks. For one thing, it can be expensive, since interest rates on instruments issued by emerging-market central banks are likely to be higher than those earned on foreign exchange reserves. Also, if investors think a central bank will not be able to continue to sterilize indefinitely, expectations of future appreciation could increase hot-money inflows and make the situation worse.

In short, it is easy to see why Latin America hates QE2. Small wonder that finance ministers and central bankers throughout the region, faced with an unappetizing menu of policy options, wish QE2 would just go away.

Still, the "currency wars" rhetoric deployed against QE2 seems overblown. The following chart, which gives real effective exchange rates for Brazil and Chile, two of the most affected countries, shows that the trend toward real appreciation was underway well before QE2 was launched, and indeed, even before its keel was laid. One factor behind the appreciation is simply that these are well-managed and dynamic economies that offer many attractive investment opportunities, quite apart from short-term speculation. Another factor is a sharp run-up in the prices of regional commodity exports since the depths of the global crisis. These underlying pressures would not disappear even if the Fed were to cancel QE2 tomorrow. Finally, there is often-repeated fact that if QE2 does succeed in getting the US economy back on track, Brazil, Chile, and all our trading partners will benefit from increased demand for their exports. 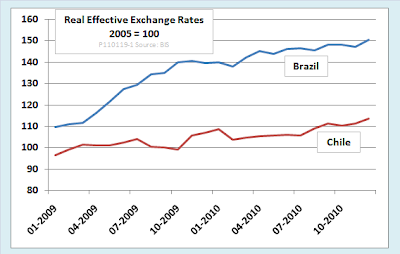 The bottom line: Yes, QE2 is making waves in international financial markets, although hardly a tsunami, as some have called it. Yes, it does make the life of Latin American finance ministers and central bankers just a bit harder. But their lives would be hard anyway, so perhaps they should at least be grateful for a convenient scapegoat.

Follow this link to view or download a short slideshow discussing QE2, its effects on Latin America, and the impossible trinity.
Posted by Ed Dolan at 10:31 PM