Why the Correct Answer to “What Should we do About Slowing Growth?” is “Nothing.” 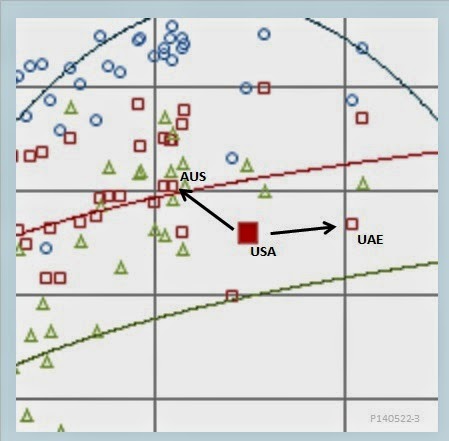 There has been a lot of agonizing lately about slowing economic growth. Some of it understandably laments the slow recovery from the Great Recession, but the more interesting part concerns long-term growth prospects. Brad DeLong has recently written a thorough review of the stagnation literature under the title “Is Economic Growth Getting Harder? If so, why, and what can we do about it?”

DeLong is a little less pessimistic than some of the others. He thinks the growth of real GDP per capita will slow only by three-tenths of a percentage point from its historic norm of 2 percent. But, more importantly, he suggests an entirely different way of thinking about growth policy—one that changes the question from “What can we do about slow growth?” to What should we do about it?” If we follow DeLong’s reasoning to its logical conclusion, I think the correct answer is that we should do nothing.

The rest of this post will highlight a couple of DeLong’s key themes and flesh out some of his generalizations with relevant data.

GDP is the wrong indicator

The first point is that real GDP per capita, or per worker, is the wrong indicator. As DeLong puts it, “What we are really interested in is material well-being, what people want and need, and whether they actually obtain it. We are interested in material production as a springboard to human flourishing.”

The point is hardly original, but it is important. Let me show why by using data from the Social Progress Index(SPI), which is the latest and most ambitious effort to attach specific numbers to “human flourishing.” The SPI is especially appropriate for the purpose because it explicitly treats GDP as an input to human welfare and asks how well various economies transform raw GDP into outputs such as health, education, rights, and opportunities.

Our first chart plots GDP per capita against the SPI for two measures of GDP per capita, one stated in U.S. dollars at market exchange rates and the other  in dollars that are adjusted for purchasing power parity (PPP), using the newest data from the World Bank’s International Comparison Program. The PPP adjustment takes into account differences in the cost of living among countries, so we might expect PPP-adjusted GDP per capita to correlate more strongly with the SPI than GDP measured at market rates. In practice, though, the difference in fit is small. The point that represents the United States is close to the trend line for both measures. 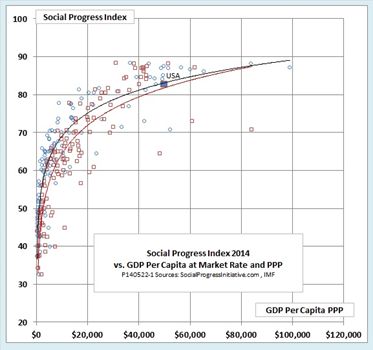 ·        First, the positive slope of the scatter plots shows that material production, as measured by GDP per capita, really is a springboard to human flourishing, as measured by the SPI. The overall correlation between the SPI and the log of GDP per capita is .88 for market exchange rates and 0.91 for purchasing power parity. The biggest outliers on the downside—wealthy countries with SPI scores far below the trendline—are Kuwait, the United Arab Emirates, and Saudi Arabia. (I discussed some possible reasons in an earlier post on the “curse of riches.”) The biggest outlier on the upside is New Zealand, which manages to achieve the top SPI score even though its PPP-adjusted real GDP per capita of $31,000 is only twenty-fourth in the world and just two-thirds that of the United States.

·        Second, the relationship of GDP to the SPI is far from linear. For poor countries, even modest gains in GDP have a big payoff in terms of the quality of life. As income increases, the curve flattens out. After reaching a GDP per capita of $25,000 measured by PPP, improvements in the SPI from further GDP growth alone are modest. (Portugal and Slovakia are just above the $25,000 line, Estonia and Russia just below it.)

·        Third, the relationship of GDP to SPI not only flattens as countries grow wealthier, it becomes significantly less tight. For countries below the $25,000 threshold, the correlation between GDP and the SPI is .83 but it is just .60 for countries above it. If we interpret those correlation coefficients in terms of R2s, we could say that for the poorer countries, GDP “explains” about two-thirds of differences in SPIs, but for the wealthier countries, only about one third.

We can explore the relationship between GDP and human flourishing further by breaking the SPI down into three main sub-indexes:

The next chart plots each of the three sub-indexes separately against GDP per capita at PPP. The general pattern is the same for each of them as for the SPI as a whole: Each sub-index rises with increasing GDP; the payoff to added GDP decreases as countries get richer; and the correlation between GDP and noneconomic indicators gets looser as income rises. 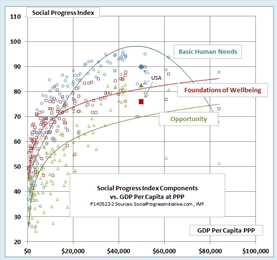 This chart has two additional features that are not evident from looking at the SPI as a whole:

·        The United States, which lies close to the trendline for the SPI in our first chart, turns out to perform below the trend in converting GDP to satisfaction of “basic human needs” and “foundations of wellbeing,” but well above the trend for the “opportunity” sub-index.

·        Exponential trendlines, as used in the first chart, provide a reasonably good fit for “foundations of wellbeing” and “opportunity,” but not for “basic human needs.” For that sub-index, a quadratic trendline provides a better fit. The satisfaction of basic needs peaks at a GDP per capita just over $40,000 and falls thereafter. The best-performing country on the basic needs sub-index is Denmark, which ranks eleventh in terms of per capita GDP in our sample of 127 countries. Japan, which ranks twentieth in GDP, is only one index point below Denmark.

Let’s turn now to another of DeLong’s key points. He is concerned that the secular stagnation literature is addressing the wrong questions when it comes to policy. “The focus on real GDP growth and its possible—or likely—slowing,” he says, “is a setup to panic us into making policy decisions we really do not want to make.” “Whether we should tradeoff potential growth for other objectives,” he continues, “is not something that depends on how fast growth is.” Whether we think the underlying trend of growth is slowing or not, policy should not be focusing on growth for growth’s sake.

That certainly makes sense to me. To see why, let’s zoom in on a small inset from our second chart: 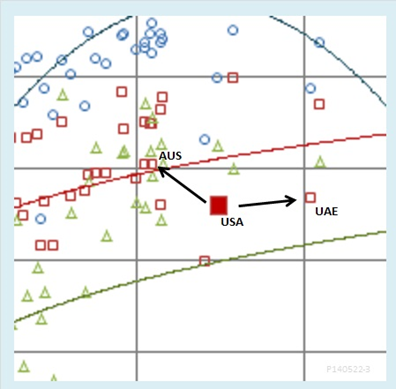 What we’re looking at here is the position of the US economy in terms of real GDP per capita at PPP (horizontal axis) and the sub-index of the SPI called “foundations of wellbeing,” (vertical axis), as indicated by the red points and red trendline. The United States is below the trendline—an underperformer. Consider two policy strategies for improving the situation.

Strategy A would consist of an all-out effort to accelerate growth. If it succeeded in doing that without worsening the efficiency with which the US economy converts GDP inputs into wellbeing outputs, the policy would move us parallel to the red trendline, eventually passing close to the point that represents the United Arab Emirates. That would entail roughly a 25 percent increase in real GDP per capita (measured at PPP) and an increase in our “foundations of wellbeing” score from 75.96 to 76.74. If Strategy A managed to increase the rate of growth from DeLong’s forecast of 1.7 percent to the 2 percent historical norm, we would catch up with today’s UAE in just 12 years (Presumably, the future  UAE would have moved on by then.)

A look at the components of the “foundations of wellbeing” sub-index shows that Strategy B would require policy initiatives in areas like improving the quality of elementary and secondary education, upgrading the Internet, and cutting air pollution. All those things would require resources, which would mean either raising taxes, or diverting private investment away from building shopping malls to building schools, or some combination of the two. It might be a good idea to throw in a carbon tax to cut pollution while raising revenue for other parts of the package.

Critics might say that the cost of those initiatives would slow the growth rate. Maybe or maybe not—some components of the package, such as improved education and better information infrastructure, could actually enhance growth. Still, for the sake of discussion, suppose that Strategy B cut the growth of per capita GDP to just 1 percent a year, and that it took 12 years for the program to raise the US economy’s efficiency in converting GDP to “foundations of wellbeing” to the Australian level. Even so, the United States would reach the trendline at a point where it was still ahead of Australia in terms of GDP per capita.

So here is the choice: After 12 years of Strategy A, which focuses on growth, we would gain slightly less than one point on the “foundations of wellbeing” index and catch up with the UAE. After 12 years of Strategy B, which focuses on directly on wellbeing, we would add five points to the same index and catch up with Australia, with room to spare. Which outcome is more attractive? You can take your choice, but I would definitely choose Strategy B.

This brings us back to our original question of what we should do about a possible slowdown in GDP growth. The answer is, “Nothing.”

·        First, my position is not anti-growth. Rather, it takes a laissez fair stance toward growth. I am not among those who think we can save the planet only if we stop the economic machine in its tracks. Advances in technology, along with growth of human and physical capital, make it possible to invest more in all kinds of welfare –enhancing activities, including, if we choose to do so, protecting and restoring the environment. It is simply untrue that stopping growth is the only way to save the environment.

·        Second, saying that we should focus on welfare-enhancing policies leaves a lot of room for discussion about which policies best enhance welfare. The Social Progress Index is a grab bag of every good thing its developers could think of. Clearly, peoples’ priorities differ. Some would prefer a focus on health, others on education, and still others on personal and political freedoms. The only point I insist on is that the proper guide to policy is some rationally weighted concept of human welfare rather than the mindless assumption that faster GDP growth will automatically take care of everything.

·        Third, I would emphasize that the do-nothing conclusion of this post applies to the long-term growth trend, not to short-term cyclical movements. Whatever the long-term trend, we still need intelligent countercyclical policy for the short run. When the economy is operating below its potential, as the US economy has in recent years, we should take prudent measures to accelerate the return to normal and cheer when those policies succeed, just as we should take prudent measures to avoid overheating during a boom.

The bottom line is that policies that improve human welfare always make sense. Policies that sacrifice human welfare to achieve growth for its own sake never do. Yes, there is a positive correlation between growth of real GDP per capita and broad measures of human welfare, but the relationship is much weaker for rich countries than for poor ones. For high-income countries, strategies that focus on improving the efficiency of transformation of GDP into wellbeing are far more attractive than policies that focus on growth and hope that wellbeing will take care of itself. So, I say, go for welfare-enhancing policies and let growth come out however it may.