India's Secret Weapon in its Economic Race with China

The eclipse of the G7 by the G20 puts the spotlight more than ever on India and China as the economic superpowers of the future. So far, China has the lead, but India has a secret weapon that will carry it into first place by the end of the century. What exactly? Widely spoken English? That helps India's service sector, but it is not decisive. Democracy? True, democracies outperform authoritarian regimes on average. It is no coincidence that 17 of the G20 are functioning democracies, but China is hanging in there as an exception to the rule. No, the real secret weapon that will carry India into the lead is demographics.

It is not just that sometime around 2030, India's total population will become larger than China's. Total population is an ambiguous factor in prosperity, as those of us know who were raised on the intellectual sparring of Julian Simon and Paul Ehrlich. On the one hand, people are a country's most valuable resource; on the other hand, badly managed population growth can overtax other resources and leave a country populous but impoverished. Rather than total population, it is the inner dynamics of population growth, in particular, the evolution of the dependency ratio, that will make the difference for India and China. 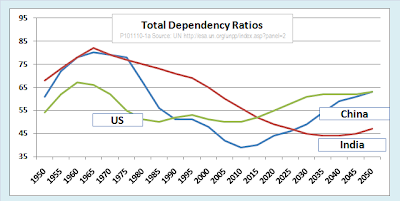 As the chart shows, India is just entering its Goldilocks period while China, like the United States, is already leaving. Furthermore, The dip in the Indian chart is more gradual and longer-lasting than the corresponding dip for China. For the next several decades, China will be tacking into the wind while India still has its spinnaker up. Chinese economic growth will slow, while India's, assuming a supportive policy environment, will edge past it.

What explains the difference in population dynamics? The answer can be found in the evolution of the total fertility rate in the two countries. (Total fertility is a measure of the number of children born to a representative woman over her lifetime.) China's total fertility rate dropped from almost six in 1965-70 to under three just a decade later. The famous one-child policy, introduced in 1978, contributed to the decline, but it was already well underway before that. By 1990-95, China's fertility rate had dropped below the replacement mark of about 2.1. In India, by contrast, the decrease in total fertility from six to three took 30 years to accomplish, and fertility is not expected to drop to the replacement rate until sometime in the coming decade. To switch metaphors, China slammed on the brakes, leaving big skid marks, while India made a more prudent deceleration. Furthermore, as Adam Wolfe, among others, has pointed out, China's official data may understate the true rate of decline in fertility, and therefore understate the future demographic drag on the country's growth.

There is nothing inherently wrong with slow, or even negative, population growth, but the transition to it is not easy to manage. The United States is not doing a particularly good job, as we know from the wrenching debate over the impact of social security and Medicare on the budget deficit. China is not doing well either. It has not yet found a social safety net to replace the long-vanished "iron rice bowl" of the Maoist era, and social insecurity, in turn, contributes to other imbalances in its economy. India, too, is not not exactly a Swedish-style paradise for the young and the old, but at least it has more time to get its act together.

In short, India, by all indications, is likely to be the world's largest economy at the end of the 21st century. It appears that President Obama knew what he was doing when he endorsed India for a permanent seat on the UN security council during his recent South Asia visit. He wasn't just maneuvering to put together a coalition to contain China, as some commentators suggested. Instead, he was backing the probable winner in the global economic race.

Follow this link to view or download a short slide show with additional demographic data for India and China.