How Chinese Inflation Policy Will Shape the Yuan-Dollar Exchange Rate

By freezing its exchange rate and pulling out all the stops on fiscal and monetary stimulus, China got through the global recession with only a mild slowdown in GDP growth. Now it is facing the inflationary consequences. Consumer price inflation, after rising steadily all year, hit a 4.4% annual rate in October, approaching the government's red line. How will China choose to deal with the inflation threat? The answer is important both for China and its trading partners, because anti-inflation policy will determine what happens to the exchange rate of the yuan over the coming months.

Inflation is a key factor in exchange rate developments because the balance of trade depends on the real, not just the nominal, exchange rate--a fact that is not always clearly understood. Everyone knows that we need to adjust nominal wages for inflation to reveal trends in real wages, and adjust nominal interest rates for inflation to find real interest rates. For the same reason, we need to adjust nominal exchange rates for inflation to see what is really happening to the competitive balance between any two countries. In the case of the yuan vs the dollar, the simplest way to make the adjustment is to add the difference between the Chinese and U.S. inflation rates to the rate of nominal appreciation of the yuan. Because inflation in recent months has been faster in China than in the United States, the rate of real appreciation of the yuan has been faster than the nominal rate. The following chart breaks the monthly rate of real appreciation into its components, nominal appreciation and the inflation differential. 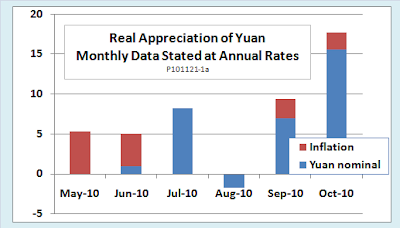 Some people find it counterintuitive that Chinese inflation causes the yuan to appreciate in real terms. The the confusion arises from a failure to distinguish between two different cases. In the first case, inflation in a country with a floating exchange rate causes its currency to depreciate in nominal terms, leaving leaving the real exchange rate unchanged. (Think of hyperinflation in Zimbabwe a few years back, which was accompanied by an equally rapid nominal depreciation of the Zimbabwe dollar.) In the second case, inflation in a country with a fixed nominal exchange rate causes its real exchange rate to appreciate. The real appreciation reflects the loss of competitiveness of the country's exports on world markets and the greater attractiveness of imports compared to increasingly expensive domestic products. The idea that inflation in a floating-rate country causes nominal depreciation in no way contradicts the idea that inflation in a fixed-rate country causes real appreciation. The two ideas simply reflect different outcomes produced by the same  market forces under different policy regimes.

In the above chart, real exchange rates are calculated using monthly changes in the consumer price index for both countries. Over the most recently reported two months, the CPI-adjusted real exchange rate of the yuan has been appreciating relative to the dollar at about a 13 percent annual rate. That would be enough to eliminate the estimated 20 to 40 percent undervaluation of the yuan in less than three.

Using consumer prices to calculate real exchange rates has the advantage that the monthly CPI for both countries is available with a very short lag. However, many observers think that real exchange rates based on  unit labor costs in manufacturing give a more accurate picture of competitiveness in international trade. Unit labor costs take into account both changes in nominal wage rates and changes in labor productivity, and a focus on manufacturing excludes price and wage changes that affect only non-traded services. Unit labor cost data is not available as rapidly or in as much detail as consumer prices, but estimates from the World Bank suggest that Chinese unit labor costs rose at an annual rate of about 4 percent in the first three quarters of this year. Over the same period, they decreased at an annual rate of about 5 percent in United States, giving a 9 percent differential. Since the June thaw in Chinese exchange rate policy, the yuan has been appreciating at a nominal annual rate of about 6 percent. Adding nine to six suggests that the ULC-adjusted real exchange rate of the yuan has been appreciating at a 15 percent annual rate, even more rapidly than the CPI-adjusted rate.

We can see, then, that rising inflation makes it harder than ever for  Chinese policy makers to restrain the ongoing real appreciation of the yuan. If inflation continues, the real exchange rate would continue to rise even if the nominal exchange rate were frozen once again. But a renewed freeze, or even a slowdown, is unlikely. On the contrary, nominal appreciation of the yuan is the most effective anit-inflation tool available to the People's Bank of China (PBoC). Nominal appreciation has a powerful double effect on inflation. First, a stronger yuan makes imported goods cheaper for Chinese consumers, bringing direct relief to the price level. Second, the more rapidly the PBoC allows the yuan to appreciate in nominal terms, the fewer dollars it has to buy for its already huge foreign exchange reserves. Since the yuan used to purchase dollars flow into the Chinese banking system, allowing more rapid nominal appreciation makes it possible to slow money growth.

Are there any tools available to the Chinese government that would allow it to have its cake and eat it too? To stop inflation while at the same time preventing unwanted real appreciation of the yuan? There may be, but each of them has disadvantages.

One anti-inflation tool used regularly by the PBoC is to "sterilize" its foreign exchange operations by selling PBoC bills, which are IOU's issued by the central bank. Sale of bills soaks up the yuan created when the PBoC intervenes in foreign exchange markets by buying dollars. However, there are limits to how many PBoC bills China's financial markets can absorb. Already interest rates on the bills are rising. This tool alone cannot solve the problem.

The PBoC can instead raise interest rates within the banking system, a tool used to fight inflation by central banks around the world. In some ways, the PBoC has greater powers than the Fed in this regard, since it has administrative control over bank deposit rates as well as the rate at which banks borrow reserves. However, Chinese financial markets are not as interest-sensitive as those in free-market economies. Interest rates have already been increased this year, and more increases are on the way, but this tool, too, is not by itself enough to stop inflation.

Finally, there has been talk of trying to contain inflation by direct price controls on food and perhaps other rapidly-rising components of consumer prices. Although price controls could have an immediate impact on the headline CPI, they would represent a step backward from China's evolution toward a market economy. If kept in place for long, price controls would risk shortages, which in turn would create a need for rationing. And, if price controls were not backed by overall monetary restraint, they could exacerbate the risk of a speculative bubbles in real estate and other asset markets.

Taking all of these considerations into account, the most likely outcome for China over the coming months is the use of all available policies in combination. Expect continued increases in interest rates and reserve requirements. Targeted, temporary price controls are also a possibility. Continued nominal appreciation of the yuan is a virtual certainty. There appear to be factions within the Chinese policy establishment that would even like a slightly faster pace of nominal appreciation. Used together, these tools may succeed in breaking the upward trend of Chinese inflation, but they are unlikely to fully erase the inflation differential with the United States.

As long Chinese inflation remains above the U.S. rate, the real exchange of the yuan will continue its steady appreciation relative to the dollar. Contrary to the political bluster heard from some quarters, appreciation of the yuan will not solve all the world's problems. Over time, however, we can expect it to make a helpful contribution to easing some of the most acute global imbalances.

Follow this link to view or download a short slide show with additional details regarding the relationship between Chinese inflation and the yuan-dollar exchange rate
Posted by Ed Dolan at 10:04 PM