At a summit last week, EU leaders made another try to fix their fiscal policy rules. Why is this latest round of tinkering unlikely to solve the euro's endemic problems of budget crises, bailouts, and fiscal free riders?

Budget problems, of course, are not unique to the euro area. Democratic governments everywhere have a hard time holding fiscal policy to an optimal path. Election cycles are short and the ill effects of excessive deficits take years to develop. The resulting bias toward deficits is a classic example of what economists call time inconsistency--a clash between short-term and long-term goals.

Time inconsistency is a problem everywhere, but membership in a currency union compounds it by adding a second source of bias toward deficits--the free rider problem. An everyday example of the free rider problem occurs when you get together in a restaurant with a group of friends. What you order depends on how you agree to handle the bill. If you know in advance that you are going to get a separate check, you order a beer and a hamburger. If everyone agrees to pay an equal share of single check for the whole table, you order steak and champagne. Countries with their own currencies currencies are in the first position with regard to their fiscal policy, whereas members of a currency union are in the second.

Suppose first that your country has its own currency. There are always short-term political benefits of increasing the deficit. You can reward friends with contracts, subsidies, or tax cuts. A quick boost to aggregate demand can raise incomes and cut unemployment ahead of the next election. Offsetting these benefits are the long term costs of excessive deficits. The central bank, if independent, may react to fiscal expansion by raising interest rates. A bigger budget deficit may trigger unwanted exchange rate movements. Ultimately, if fiscal policy is unsustainable for a long period, your country may face the unpleasant alternatives of default, hyperinflation, or forced austerity. With an independent currency, both the costs and the benefits are internalized within your own economy, so that the long-term costs help keep in check the pro-deficit bias that arises from time inconsistency.

If your country is a member of a currency union, the situation changes in a fundamental way. The benefits of fiscal profligacy--goodies for your friends and expansion ahead of the next election--still accrue largely to your home economy. However, the costs of excessive deficits are now spread widely among your currency partners. Three mechanisms spread the cost. First, the central bank of the currency area cannot raise interest rates for just one member at a time to offset its excessively expansionary fiscal policy. Second, the budget position of a single member of a currency union (especially a small one) will have little effect on the common currency's exchange rate, and to the extent it does, any pain from exchange rate movements is spread among all members. Third, the costs of a threatened default are also spread to currency-area partners, since default by any one member of a currency union would adversely affect the reputation of all members, driving up their borrowing costs.

A country in a currency union, then, is subject to a double bias toward excessive deficits. First, it is subject to the same time-inconsistency bias as are countries with independent currencies. Second, because benefits of deficits are concentrated at home while costs are spread to currency-area partners, it is subject to an additional free-rider bias.

The free-rider bias toward excessive deficits was well known to the designers of the euro area. The 1992 Maastricht Treaty, which led to the establishment of the euro, included rules placing limits on members' budget behavior. Deficits should not exceed 3 percent of GDP (with limited allowance for recessions) and government debt should not exceed 60 percent of GDP. EU authorities were authorized to impose fines on countries that exceeded the limits. Furthermore, the treaty included a tough no-bailout clause forbidding any member from assuming another's sovereign debts.

Unfortunately, these mechanisms haven't worked very well. As the chart shows, even at the peak of the expansion, in 2007, only 7 of 12 euro members were safely inside the 3/60 limits. Two years later only Finland and Luxembourg remained in full compliance. The problem lies not just the fact that many members missed the deficit target at the trough of a deep recession. That is to be expected. A more serious flaw is how poorly the 3/60 rules served to give early warning of fiscal risk. Spain and Ireland went from full compliance to the brink of insolvency almost overnight because the crisis exposed fiscal fragilities not visible in the simple debt and deficit ratios. 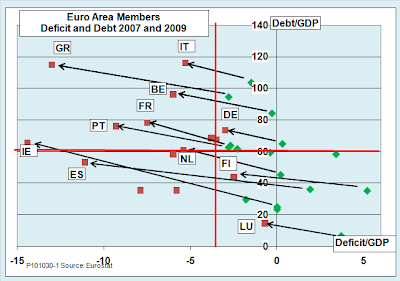 The failure of the Maastricht treaty's budget rules had two results. First, in May of this year, to avoid an imminent default by Greece and likely contagion to other weak euro members, the EU cobbled together the temporary European Financial Stability Fund (EFSF). The fund violated at least the spirit of the no-bailout rule, while at the same time showing that rule's lack of political realism. Second, it prompted a major rethink of fiscal policy rules as a whole.

Both issues were on the table at last week's summit. Proposals were made to make the bailout fund permanent, and, in mitigation of any increase in moral hazard, to institute a new, much tougher set of penalties for countries that violate the rules in the future. However, prospects for an effective set of rules and penalties seem dim.

First, there is the problem of the 3/60 formula itself. For some time, it has been evident that these numbers are arbitrary, and that the idea of uniform debt and deficit limits for all countries is unsound. This time around, Poland was the one to raise this point. Poland, at the urging of the EU, recently carried out a sweeping pension reform that strengthens its budget in the long run but makes its numbers look bad in the short run. Not surprisingly, it wants any new rules to recognize its efforts.

Second, there is the issue of how to design an appropriate set of penalties. Financial penalties for noncompliance are simply unworkable. For one thing, imposing a large fine on a country that is already in a budget crisis only makes the matter worse. In addition, there is a widespread belief that no one would ever have the courage to impose big fines on the euro's core members. When Germany and France ran excessive deficits for several years in the early 2000s, EU authorities simply waived the penalties. Small countries are not so sure the courtesy would be extended to them in the same circumstances.

Third, there is the problem that any rule changes beyond minor tinkering would require amendment of the EU's founding treaty, and such changes require unanimity. Some EU members stipulate that treaty changes be approved by referendum. That dooms the prospects for major changes, such as the sensible proposal  that penalties for fiscal noncompliance should be administrative rather than financial, taking the form, for example, of a temporary suspension of voting rights. What leader would like to be tasked with asking voters to approve that proposal?

Fourth, there is the lopsided nature of the EU as a fiscal entity in the first place. In the US, the split of central vs. state and local budgets is about 60/40. That makes possible large-scale federal-to-state transfers that help keep states solvent in a crisis. In the EU, the split is something like 2/98. There just isn't enough money in the EU's central budget to devise a workable system of carrots, instead of sticks, to coax member states into fiscal compliance.

Fifth, there is the problem of how tough to get with creditors of member countries that get into into solvency troubles. To limit the moral hazard associated with a permanent bailout fund, French and German negotiators have been pushing for inclusion of the principle that bondholders should absorb part of the costs of future bailouts. That might add to the pressures for countries to keep their budgets in order, but it has potential risks. One lies in the fact that that EU banks are big holders of bonds of member countries, including those that are fiscally weak. As a result, haircuts on bondholders might reduce the cost of bailouts for member governments only at the expense of more bailouts for banks. Another risk is  that the threat of losses for bondholders might send interest rates soaring, pushing marginally solvent countries over the edge. In fact, the mere discussion of imposing losses on bondholders pushed rates sharply higher for Ireland, Portugal, and others in the days following the summit.

All things considered, then, prospects are dim that the euro area will find a solution to its fiscal policy woes any time soon. Although EU heads of state did unanimously agree on the need for new rules, their exact form remains to be worked out. The most likely outcome is a revision of existing rules drawn narrowly enough not to trigger the unanimous ratification and referendum mechanisms. Very optimistically, that might help contain the current crisis. It could give countries like Portugal and Ireland time to achieve credible fiscal consolidations before Greece is forced to restructucture, as many observers still think it must eventually do. Sooner or later, though, the long-term structural weaknesses of the euro area as a fiscal entity will resurface, and yet another attempt at reform will have to be made.