Tax Reform as a Path to Growth-Friendly Fiscal Consolidation

The Communiqué of the recent G20 Meeting of Finance Ministers and Central Bank Governors included a line committing the world's major economies to "ambitious and growth-friendly medium-term fiscal consolidation." Fiscal consolidation (FC) is econ-speak for what most of the world calls "austerity" or "budget cuts." It refers to any program that gets the deficit down through cuts in outlays, increases in revenue or a combination of the two.

Almost simultaneously with the G20 meeting, the IMF released its latest World Economic Outlook. Chapter 3, titled "Will It Hurt?" is devoted to fiscal consolidation. It tells us that FC is almost always contractionary. To round out the picture, Christina Romer, on whose earlier work the WEO chapter is in part based, followed up with a passionate plea in the New York Times saying that now is not the time to cut the deficit.

So what gives? Is such a thing as "growth-friendly fiscal consolidation" possible, or is it not?

Let me begin by saying that no orthodox economist can be surprised to hear that fiscal consolidation has at least the potential to shrink the economy. Economists see the economy as the sum of consumption, investment, government purchases, and net exports. Tax increases eat into consumers' take-home pay and disincentivize investment, while cuts in government purchases take money out of the pockets of civil servants and contractors. Quite possibly FC also reduces imports. If so, net exports increase, but the expansionary effect is not normally enough to fully offset other, more contractionary impacts. Besides, as the WEO chapter points out, not all countries can increase net exports at the same time. Going for export-led growth when most of the world is in a slump at the same time risks unleashing a beggar-thy-neighbor trade war that nobody wins.

Rather than fiscal consolidation during a recession, the orthodox approach is countercyclical fiscal policy. That means increasing outlays or cutting taxes during a recession and then undertaking FC during the subsequent expansion. Christina Romer's New York Times piece is completely orthodox in this regard. The theoretical case for countercyclical fiscal policy is unassailable. The only sticking point is the political economy of it.

It is politically easy to pull off the "spend your way out of a slump" half of countercyclical policy. The other half, the fiscal consolidation half, is much harder. It requires the willingness to raise taxes or cut spending programs at a time when the economy is booming and it seems the party can go on forever. It is never easy to build a coalition to take away the punch bowl.

Consider the following chart, which shows the cyclically adjusted primary balance (CAPB) for the US, the UK, and the average of all OECD countries over the past two business cycles. (The CAPB is the deficit adjusted to exclude both interest expense and the effects of automatic stabilizers like income taxes and unemployment benefits.) For reasons discussed in an earlier post, the CAPB is perhaps the single best indicator of a country's long-term fiscal sustainability.

Sustainability requires that on average over the business cycle, the CAPB be kept near zero or slightly in surplus. Unfortunately, many countries fall short of the sustainability requirement. Often their CAPB remains in deficit even at the height of the business cycle, as in the 2005-2007 period on this chart. On occasion, as at the end of the 1990s, a small surplus is achieved, but not large enough to balance out longer and larger episodes of deficit over the course of many cycles. 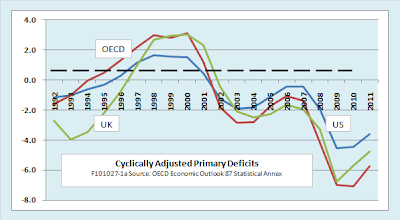 The result of this pattern is that debt gradually accumulates until one day, a country finds itself in a slump without the "fiscal space" needed to spend its way to recovery. At that point there is much wailing and many Augustinian promises of the "make me chaste, oh Lord, but not yet" variety. But those promises are not credible. The only way for a country in that position to buy credibility is to make at least a solid down payment on fiscal consolidation right now, slump or no.

In a way, things are easiest for countries like Greece or Latvia. There, the political resistance to FC is broken when, one morning, they wake up to the brutal realization that the markets will no longer buy their bonds. To avoid a shameful default, they have to turn to the IMF or their currency-area partners for help. Help is provided, but only with stringent conditionality. The conditionality turns out to be a blessing because it gives the local government the political cover of blaming evil speculators and harsh foreign taskmasters for the pain of spending cuts and tax increases. Unfortunately, it is difficult to call that kind of forced fiscal consolidation "growth-friendly," unless in the very limited sense that the alternatives could be even more anti-growth.

Countries like the US and UK are in a more difficult political position. They can still borrow cheaply and they lack foreign taskmasters to impose budget discipline from outside. When such countries run out of fiscal space, they need to find a different way to purchase the required credibility.

Faced with such a situation, the UK has chosen what I would call the G. Gordon Liddy approach. Liddy, who came to fame as a Watergate conspirator, is also noted for the feat of holding his hand over a candle until his flesh burned. Did it hurt? Of course it did. The whole point was to demonstrate that he had the willpower to do what needed to be done, pain or no. Proponents of that approach argue that willingness to suffer pain serves as a token of commitment. Commitment is then supposed to engender confidence, which boosts investment and consumption.

If the confidence-boosting effects outweigh the immediate negative impact on demand, fiscal consolidation becomes expansionary. Supposedly Denmark accomplished this trick in 1982 and Ireland
in 1987, although the IMF analysis argues that Denmark and Ireland were special cases. Only time will tell whether British fiscal consolidation turns out to be pro-growth or not.

Meawhile, since Washington seems unlikely to join Cameron and Clegg in the "Austerian" camp, what alternatives are there? Will it be enough to do as Romer advocates--just wait it out, with promises to eat that nasty spinach before going to bed? That does not seem like a growth-friendly strategy either.

Fortunately, as I am about to argue, the United States does have a genuinely growth-friendly fiscal consolidation option. It is one made possible by the fact that the U.S. tax system, as it now exists, is so massively dysfunctional that reforming it could stimulate growth and increase revenue at the same time. The elements of a comprehensive tax reform have been around for a long time. Few of them are even controversial, at least within the economics profession. The problem is that each needed element of reform involves a degree of political pain that no previous Congress or administration has ever been willing to endure.

In a single sentence, the elements of comprehensive tax reform are broadening the tax base to raise revenue while at the same time reducing high, incentive-killing marginal rates in key areas like the payroll tax, the corporate income tax, and perhaps the personal income tax as well. If the economy were now on an even keel, with the cyclically adjusted primary balance at a sustainable level, tax reform could be accomplished in a way that was revenue neutral. But the ineffiencies of the present system are so great that even revenue-enhancing tax reform could end up giving a solid boost to growth.

More specifically, the needed tax reform would very likely include one, two, or all three of the following big ideas:
I hope to explore each of these tax ideas in future posts, but meanwhile, you can find good numbers and good analysis on all of them from the Tax Policy Center. My point today is not to argue the relative merits of a VAT versus ending employer-paid health care deductions. My point is that given the political will, comprehensive tax reform really is an option for pro-growth fiscal consolidation. It is one that could start right now, without having to be back-loaded into some low-crediblity future. Sure, there is pain in tax reform. Every single line of the billion-page US tax code is there because someone loves it, someone is getting rich on it, and someone is getting re-elected on it. But maybe now is the time to put our collective hand over the tax reform candle.

Follow this link to download a short slide show with selected figures from the IMF fiscal consolidation study, together with data and figures on tax reform.
Posted by Ed Dolan at 12:07 PM