What Is QE2 Trying to Do? Is the Fed Rebasing its Inflation Target or Not?

What exactly is the Fed trying to do with QE2? Assuming that our central bankers don't surprise everyone and forgo quantitative easing after all, they seem to be following some kind of inflation targeting strategy, but what kind?

The cautious variant of inflation targeting would be one of "rebasing." In the figure below (not drawn to scale) the Fed has been trying to keep the price level close to the inflation path marked 2%, but has slipped below it to nearly flat inflation, leaving us at point A. From there, the cautious variant of inflation targeting would be to rebase by setting a new target path with the same 2% slope, but lying entirely below the previous one. To implement this variant, the Fed would calibrate QE2 to try to bring the price level up to, but not above, the new path leading toward point B. If market participants believe the Fed will try this, and will succeed, they will set their inflation expectations at about 2% going forward. 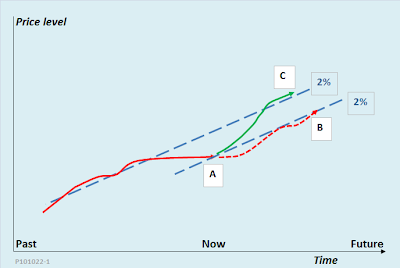 The more aggressive strategy would be not to rebase. Instead, QE2 would aim to bring inflation up to the original 2% target path, which would mean following the arrow toward Point C. Doing so would provide a much stronger stimulus, and would, ideally, lead to faster recovery of the economy while still being consistent with the Fed's mandate.
There is a lot to be said for the more aggressive strategy, the one without rebasing. However, it would be tricky to pull off. One obvious issue is whether there is really a reliable transmission mechanism running from an increase in the monetary base via massive bond purchases to an increase in aggregate demand. I have rarely seen a more divided economics profession than we have regarding this question. The only honest answer is that we won't know if the transmission mechanism will work until QE is actually tried.
Assuming the transmission mechanism does work, the second issue will be managing inflation expectations. The path back to point C, without rebasing, implies an interim period during which the rate of inflation is purposely allowed to exceed the long-term 2% target. Without that, the economy can't get back on its former target path. But if market participants do not have confidence, even a short period of higher inflation could quickly spread fear that the Fed has lost control of the price level altogether. There are a lot of people out there who look at today's bloated monetary base and get very nervous about an inflation breakout. With all that dry tinder lying around in the form of excess reserves in the banking system, such a scenario is far from impossible.
The Fed's delicate task, then, has to be to steer inflation expectations within a narrow corridor. To push the floor of the inflation expectations corridor up to the 2% mark, it has to carry out a convincingly aggressive program of bond purchases. At the same time, in order to put a ceiling on the corridor, it has to convince everyone that it has a workable exit strategy in case things start to get out of hand. The recent trial run of the reverse repo tactic for withdrawing reserves from the banking system should be read in this context.
We could have greater confidence in the Fed's exit toolkit if it had the power to sell its own central bank bills, like the People's Bank of China does. Congress is not about to grant that power, but in theory, the Treasury and the Fed working together could do the same thing. The tactic would be for the Treasury to sell newly issued bonds or bills, soaking up excess reserves of the banking system, and then sequester the funds in deposits at the Fed, with the promise that these would be left untouched until the operation had its desired effect.
Get ready to watch exactly how the Fed frames its expected QE2 gambit, both in its official statements and in speeches of board members. Will it cautiously try to rebase its inflation target, or will it act more boldly? We should find out fairly soon.
For a more detailed discussion of the mechanics of quantitative easing, see this earlier post and its accompanying slide show.
Posted by Ed Dolan at 2:23 AM