The Shaky Logic Behind Hopes for a Quick Recovery 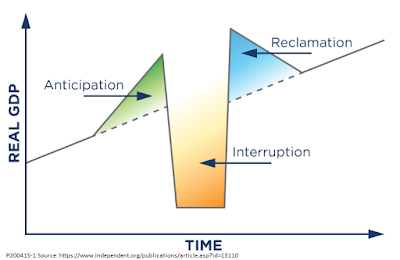 President Donald Trump promises that the economy will soar "like a rocket ship" as soon as the COVID-19 pandemic ends. Writing for the Independent Institute, R. David Ranson, like many who fear the government more than they fear the virus, agrees.

“We ought to be thankful that the economic system is resilient in a way that the human body is not,” Ranson says. As the figure shows, he foresees a short, notch-shaped “interruption,” preceded by an anticipatory stocking-up surge and followed by a similar post-pandemic boomlet as shelves are restocked.

Ranson bases his hopes for such a growth trajectory on the notion that the interruption to production will destroy no physical capital.


[A]fter the production shutdowns end, GDP will shift back above pre-crisis trend as businesses and consumers make up for lost time. Events do not as yet add up to a significantly weaker full-year performance for the US economy. Economic activity will go into hiatus, but it can be made up quickly once the crisis is over.

As I explained in this earlier post, Ranson is right to say that pandemics, which hit the economy from the supply side, disrupt things in a very different way from ordinary recessions, which hit from the the side of demand. He is also right that clumsy, improvised public health interventions like universal stay-at-home orders do more damage than would more nuanced interventions based on the test-trace-isolate principle. Everyone knows that by now. We all hope that we will be better prepared for the next pandemic than we were for this one, so that the tradeoff between saving lives and saving the economy will not be so stark.

But Ranson misses some critical parts of the story. Although it is true that the virus does not destroy industrial equipment or commercial structures, it will destroy some very important intangibles if it goes on for long.

For one thing, it will destroy critical business relationships. Employer-employee relationships, supply-chain relationships, and lender-borrower relationships cannot necessarily be turned on and off without harm. It will take time to re-establish them, leading to slower recovery. Policies like payroll protection loans will help a little, but they are not a panacea.

A second problem is that even a temporary downturn will lead to widespread bankruptcies among the many firms and households who were over-leveraged going into the crisis. Fixed-payment obligations like bonds, mortgages, and leases cannot easily be suspended during the Ransom’s "interruption." Bankrupt business entities cannot instantly or painlessly be brought to life after the crisis is over, even if they were viable concerns to begin with, which not all were. Bankrupt consumers will have to limit their consumption for months or years as they rebuild their credit. State and local governments, whose revenues are falling, but whose fixed bond and pensions obligations remain, will have to undertake painful layoffs or tax increases. Either will be a further drag on the recovery.

Finally, Ranson completely misses, or is indifferent to, how unevenly the costs of the “interruption” will be distributed. People who work in restaurants and airports will be hammered, while those who staff grocery stores and Amazon warehouses may even see their paychecks swell with overtime. Investors who foolishly put their money in airlines or cruise ships will suffer badly, while those who invested in on-line service providers or makers of medical supplies will do well. Losses to the former will exceed gains to the latter. Inevitably, some whole communities will have more losers than winners. They will recover slowly.


In Ranson’s view, the greatest dangers we face from the pandemic come from “over-zealous efforts to quarantine and delay the spread of disease” and “a larger and more authoritarian central government unlikely to be scaled back afterwards.” In my view, the greater danger comes from those who tell us everything will be fine if we just stay calm and carry on.

Previously posted at NiskanenCenter.org.
Posted by Ed Dolan at 8:07 AM