Rep. Paul Tonko's Nine Principles of Climate Change are a Call to Action. So Let's Act! 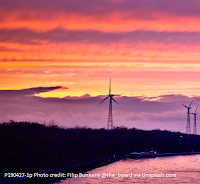 Rep. Paul Tonko, who chairs a House subcommittee on Environment & Climate Change Subcommittee, has published a list of nine principles of climate action. He prefaces his list with these remarks:

Americans are living, and dying, in the path of unprecedented flooding, raging wildfires, and battering storms driven by Earth’s changing climate. Regardless of the origins of our predicament, we have inherited these conditions. It falls to us to set aside past disagreements and rise together to meet this challenge. We agree that climate change is real.

We agree humans are driving it. We agree that we need to build solutions that meet the scale and urgency of the crisis we face. The principles outlined in this document are meant to provide a framework that moves the lines of our agreement forward and helps us build a comprehensive national climate action plan together.

As we assess the ideas before us, no options should be off the table. Rather, I submit that any climate proposal we consider should be measured against the principles enclosed here. They reflect extensive conversations with Members of Congress and stakeholders. I present them to you for your consideration, reflection, and feedback.

As a strong backer of climate action, here are my responses. (Words in italics at the beginning of each section are Tonko’s, either full quotes or slightly edited for length.)

We certainly need a radical reduction in GHG emissions by mid-century, but full net carbon neutrality may be an overreach. Emissions reduction, like many economic and engineering processes, tends to follow an 80/20 pattern, wherein the first 80 percent of the cleanup absorbs half the cost while the remaining 20 percent costs as much again as the first 80. Even within the last 20 percent, most of the cost is in the last few percentage points. For example, something like the schedule of reductions given in HR 763, a fee-and-dividend approach backed by the Citizens’ Climate Lobby, which calls for roughly an 88 percent reduction by 2050, would be more realistic.

2. A Clean U.S. Economy Must Be Strong, Competitive, and Fair. Congress must ensure emerging clean energy industries provide fair wages and safe working conditions. It must also protect America’s energy-intensive and trade-exposed industries from anti-competitive behavior by nations that have not taken significant steps to combat climate change or enforce meaningful labor and environmental standards.

If “fair wages and safe working conditions” mean adherence to wage and working standards applicable to the entire U.S. labor force, then this is all to the good. However, it would be wrong to require decarbonization jobs to meet higher standards than those that prevail elsewhere. Labor reform is a separate issue that should not be approached through the back door of climate policy.

Similarly, climate action should not become a pretense to pursue a broader program of trade protectionism. The best approach to international aspects of decarbonization is to impose a domestic carbon tax with strong, WTO-compliant, border adjustments to prevent the transfer of carbon intensive manufacturing to other parts of the world. (Again, see HR 763 for one version of a border adjustment mechanism.)

3. Climate Action Should Invest in America’s Future. Such action requires Congressional support for innovations in technology, policy, and finance to accelerate the clean energy transition

Yes — so long as such investment is guided by sound business principles. A broad investment incentive such as a carbon tax would be tech neutral. It should not require the government to pick winners in ways that are vulnerable to lobbying by special interests or risk locking in technology mistakes, such as mandates for use of ethanol as a motor fuel.

Principles four and five can best be served through a carbon tax with an appropriate fraction of the revenue distributed as a dividend to low-income groups. “It will hurt the poor” should never be allowed to override “It will help the environment.” (For a full discussion, see my earlier post, “Would a Carbon Tax Really Hurt the Poor?”

This is an important point. Any climate policy must emphasize the complementarity of mitigation and adaptation. Because of the inherent momentum of global climate systems, even cutting GHG emissions immediately to zero would not stop long-term processes like sea-level rise or changes in rainfall patterns in their tracks. We will inevitably need to adapt.

7. Climate Action Should Empower State, Local, Tribal, and Territorial Governments.
Yes, of course everyone should pitch in and everyone should have a voice. But “empowerment” should not mean granting every local community a right to veto wind turbine or extensions of the smart grid. If climate is to be a priority effort, we must maintain a global perspective, not capitulate to every manifestation of NIMBYism.

8. Climate Action Should Avoid Harm to First Movers. Whenever possible, it should avoid penalizing entities that have taken early action.

I don’t really understand what this means. Is there some hidden agenda here? For example, does it mean that because Iowa farmers were “first movers” in gearing up to produce corn ethanol, we should not “harm” them by taking away the subsidies for a technology that, in the opinion of many, has turned out to be a dead end?

Hear, hear! This is the heart of the matter. Can anyone doubt that a carbon tax is the best way to do this? Why not just say so!

Your principles are great, but it's time to move from principles to actual legislation. There is already a bill on the floor to do this that puts a price on carbon, it treats low-income communities fairly, it includes a strong border adjustment, and it includes comprehensive guidelines for scientific and regulatory review. You could do worse than just to add your name to the list of sponsors on HR 763. If that bill is not good enough for you, I hope we see your own version  soon!