In Search of a Better Measure of Labor Market Slack 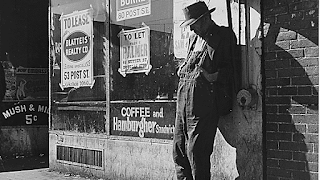 Every month we watch for changes in the unemployment rate. Most people cheer when the unemployment rate falls — how can we not like it when more of those who want to work can actually find a job? But low unemployment makes economists and policy makers nervous. Is there enough slack for further growth? Is the economy overheating? Does the Fed need to apply the brakes?

To understand what is really going on, we we need to think more about whether the official data from the Bureau of Labor Statistics are really the right numbers to cheer or to get nervous about. Not necessarily. Here is a short tutorial on how the government measures the degree of slack in the labor market, and how it could be done better.

The standard unemployment rate counts people as unemployed only if they are not working but have actively looked for work in the previous four weeks. That leaves out two important reserves of willing labor.

One of these reserves consists of people who are not working and say they want a job, but have not recently looked for work. As of April 2019, 4.9 million people, or 1.9 percent of the adult civilian population, fell into this category. Of those, 1.4 million who had looked for work within the past year, but not within the past month, were counted as marginally attached to the labor force. Among the marginally attached, 454,000 people, known as discouraged workers, reported that they had not looked for work because they thought no jobs were available.

Oddly, the 3.5 million who say they want a job but have gone more than a year without looking have no official name. For lack of any thing better, we can call them invisible unemployed.

A second untapped labor reserve consists of people working part-time for economic reasons (PTER). These people, sometimes called “involuntary part-time workers,” work less than 34 hours per week because they can’t find full-time jobs or because their employers have cut their hours. As of April 2019, there were 2.8 million PTER workers. They are distinct from the 22 million people who voluntarily worked part-time because of school, family responsibilities, retirement, or other “noneconomic” reasons. 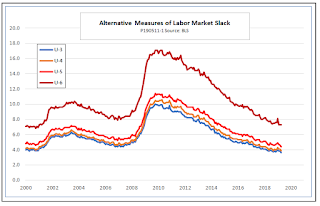 A better measure of slack

A lot of people see U-6 as a better measure of labor market slack because it includes more of the economy’s reserve workers. We sometimes see people call it the “real” unemployment rate. But U-6 has its own problems. There is an even better measure out there, although it is less widely known than it should be.

If you are looking for a “real” measure of labor market slack, I recommend the non-employment index (NEI), published each month by the Richmond Fed. The NEI is based on research first published by Richmond Fed economist Andreas Hornstein, San Francisco Fed economist Marianna Kudlyak, and McGill University economist Fabian Lange.

The NEI directly addresses two major shortcomings of U-6: The fact that U-6 leaves out the millions of people we have called the invisible unemployed, and the fact that people don’t have jobs but say they want to work vary greatly in how easily they could be drawn into actual employment.

Instead of treating everyone who wants a job as statistically equal, the NEI recognizes that not all non-employed workers are equally attached to the labor force. To allow for those differences in attachment, the NEI uses a weighted average with weights based on transition rates.

Transition rates are the probability that workers any given labor force category will make the transition from non-employment to employment in any given month. For example, in a good year like 2007, about 28 percent of people who have been out of work for 26 weeks or less find a job each month. Even in a bad year, such as 2010, the transition rate for the short-term unemployed is 22 percent. Those transition rates show a high degree of attachment to the job market.

At the other end of the spectrum, the transition rate for people who classify themselves as retired and say they do not want a job is only 1.5 percent a month, and does not vary much from good years to bad. Conclusion: Most people who say they are retired are serious about cutting their ties with the world of work.

For people between the short-term unemployed and the retired, transition rates vary less than one might think. Here are the numbers:

These transition rates cast serious doubt on the approach used by the BLS to construct its alternative measures of unemloyment. Those measures implicitly rank workers as follows in terms from most strongly to least strongly attached to the labor force: long-term unemployed (included in U-3); discouraged workers (U-4); marginally attached workers (U-5 and U-6); and the invisible unemployed (not included in any of the U’s). Yet the transition rates rank the first three groups in the reverse order, and show that even the invisible unemployed are almost as strongly attached as the long-term unemployed.

In short, when it comes to the strength of labor force attachment, as measured by transition rates, the categories of “marginally attached” and “discouraged” provide little useful information. The NEI recognizes this by assigning weights to all four of these groups in proportion to their (nearly equal) transition rates.

To complete the picture, the Richmond Fed also publishes a version of the NEI that both includes people working part time for economic reasons (NEI+PTER). In calculating U-6, the BLS gives PTER workers the same weight as those who do not work at all. In the NEI+PTER, they get a weight of 30 percent, which is the average monthly transition rate for PTER workers from part- to full-time work. That happens to be about the same as the transition rate for short-term unemployed workers.

The next chart compares the NEI including involuntary part-time workers with U-3 and U-6. 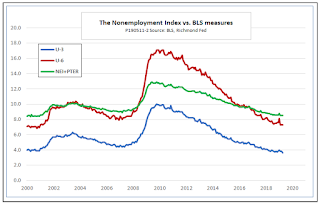 Seen from the perspective of the NEI, the Great Recession was still the worst economic downturn of the Post-World War II period. Bad as it was, however, it was not as bad as U-6 made it look.

Furthermore, the chart shows us that U-6 and U-3 understate the degree of labor market slack in periods when the economy is near its cyclical peak. In 2000, 2007, and again today, the NEI suggests that reserves of nonemployed but willing labor are greater than either U-3 or U-6 indicate. Those reserves, which don’t show up in the numbers from the BLS, help explain why inflation has stayed under control even while the official unemployment rate has reached a 50-year low.

The more we dig into the numbers, the more we can see that there is no such thing as a “real” or “true” measure of labor market slack. People who are not working but say they want to vary in how hard they are looking, in how choosy they are about the kind of work they would accept, and in how attractive they are to potential employers.

The official unemployment rate, U-3, does a poor job of addressing these subtleties. The alternative BLS measures, such as U-6, are only slightly better. The NEI and NEI+PTER do a better job of extracting answers from the available data than any of the BLS indicators. They are not perfect, but they seem to be the best we have.