Repeal Fuel Economy Standards and Replace Them with a Tax

The Wall Street Journal reports that automakers are asking the EPA to repeal automobile fuel economy standards, known as Corporate Average Fleet Economy (CAFE) standards, which are set to rise to 56 miles per gallon by 2025. Repealing the standards would be a good idea, provided they were replaced by tax designed to achieve an equivalent saving in fuel. A carbon tax would do the job nicely, but an increase in the existing tax on motor fuels would also work.

What, exactly, is wrong with the CAFE standards? The fundamental problem is that they attack the third-party effects, or negative externalities, of motor fuel use, such as pollution, highway congestion, and accidents, only partially and indirectly. As a result, the cost of achieving a given reduction in fuel use via CAFE standards is higher than it would be if the same result were achieved more directly through a carbon tax or an increase in the federal gasoline tax.

To understand why, we need to consider the various ways consumers can cut back on fuel use. In the short run, they can buy an efficient hybrid instead of a gas-guzzling SUV, they can reduce discretionary driving, or they can shift some trips from their Ford F-250 to their Honda, if they happen to have one of each in the driveway. Given more time to adjust, they can make work and lifestyle changes like moving closer to public transportation, work and shopping, changing jobs, or working at home.

The problem with higher CAFE standards is that they encourage fuel saving only with regard to the choice of what car to buy. Once a consumer buys a low-mileage vehicle, the cost of driving and extra mile goes down, thereby reducing the incentive for fuel-saving measures like moving closer to work, working at home, riding the bus to work, or consolidating errands.

Economists refer to the tendency of more fuel-efficient vehicles to induce additional driving as the rebound effect. For example, suppose that a 10% increase in fuel efficiency would cause a 3 percent increase in driving. The increased miles driven would partly offset the increase in miles per gallon, so that total fuel consumption would decrease by only about 7%.

To the extent that externalities are proportion to the quantities of fuel consumed, as they are in the case of air pollution, higher CAFE standards are still somewhat helpful. However, the rebound effect causes an absolute increase in those externalities that are proportional to miles driven, including road congestion and traffic accidents. They also increases the cost of road maintenance, because the wear and tear from more miles driven is only partly offset by the lower average weight of high-mileage vehicles.

The very fuel-saving strategies that CAFE standards discourage, like moving closer to work or consolidating errands, are often the ones that have the lowest costs. That is why the total cost of reaching a given national fuel-saving target will be greater when achieved through CAFE standards than when induced by an increase in fuel taxes. A 2004 study from the Congressional Budget Office concluded that an increase in the federal gasoline tax would achieve a given reduction in fuel economy at a cost 27 percent less than that of an equivalent tightening of CAFE standards. Furthermore, its effects would be felt more quickly, because they would not have to wait for the gradual turnover of the national motor vehicle fleet. Over the 14-year time horizon of the CBO study, the gas tax increase would save 42 percent more total fuel.

A 2013 study by Valerie J. Karplus and colleagues of MIT found an even more dramatic difference. That study estimated that achieving a given fuel savings through CAFE standards would cost six to fourteen times more than achieving the same result through an increase in fuel prices.

The variable most critical to the size of the rebound effect, and therefore to the relative merits of CAFE standards vs. fuel taxes, is the price-elasticity of demand for fuel, that is, the percentage reduction in fuel use for each one percent increase in fuel price. The less elastic is demand, the stronger is the case for CAFE standards; the more elastic, the larger the rebound effect and the stronger the case for raising fuel taxes.

What do we know about price elasticity? A widely cited study by Molly Espey of the University of Nevada concluded that the best estimate for the price elasticity of gasoline demand was -0.26 in the short run and -0.58 in the long run. Those estimates strongly undermine the case for CAFE standards.

A more recent study by Todd Litman of the Victoria Transport Policy Institute estimated long-run fuel price elasticities to be in a range of -0.4 to -0.8.

To be sure, not everyone will be convinced by elasticity studies. They are just numbers. Some people will continue to believe that prices have no effect on driving behavior, that people will just drive whatever and wherever they want regardless. Here is a picture, then, that is worth a thousand meta-analyses. Taken from the Litman study cited above, it shows a convincingly tight relationship between fuel prices and fuel use across OECD countries. Can it really be just coincidence that the United States, with the lowest fuel prices, also has the highest fuel consumption? 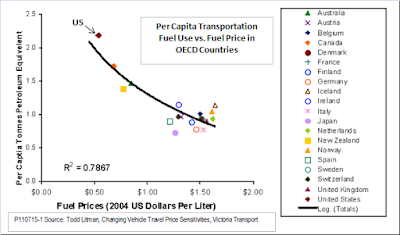 All this leaves one last question. If CAFE standards are such a bad idea, why do they remain so popular? If you are an economist, choosing higher fuel taxes over CAFE standards looks like a no-brainer, but if you are a politician, fuel taxes have an obvious drawback. Fuel taxes make the cost of reducing consumption highly visible. You see the big dollars-per-gallon number right there in front of you every time you drive up to the pump. CAFE standards, in contrast, hide the cost. You pay the price of a higher-mileage car only when you buy a new one, and even then, the part of the price attributable to the mileage-enhancing features is not broken out as a separate item on the sticker. You may notice that your new car costs more than your old one did, but there are lots of other reasons for that besides fuel economy.

It is a classic case of the TANSTAAFL principle—There Ain't No Such Thing As A Free Lunch. If you try to make something look like it’s free, it only ends up costing more in the long run. If you are a politician, you may well prefer a big hidden cost to a small visible cost. If you're a friend of the environment, you should know better.

The above includes updated passages from this earlier post on CAFE standards.