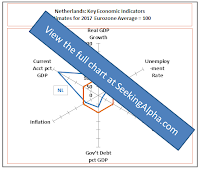 Three, possibly four Eurozone countries will hold national elections this year in which the populist right hopes to score major gains. Outright victory still seems unlikely in any of them, but following Brexit and Donald Trump's victory in the US elections, observers are nervous.

The Netherlands, with elections in March, is the first of the four. France will follow in April, Germany later in the year, and Italy, perhaps, depending on how things play out. Given the timing, a big win for its right wing party, the PVV, led by Geert Wilders, would set an ominous tone.

Fortunately, the Netherlands enters the election cycle in relatively good economic shape. As the following chart shows, it is expected to outperform the Eurozone average this year on each of six key economic indicators.>>>