Where has Fiscal Policy Been Worse, Greece or the US? 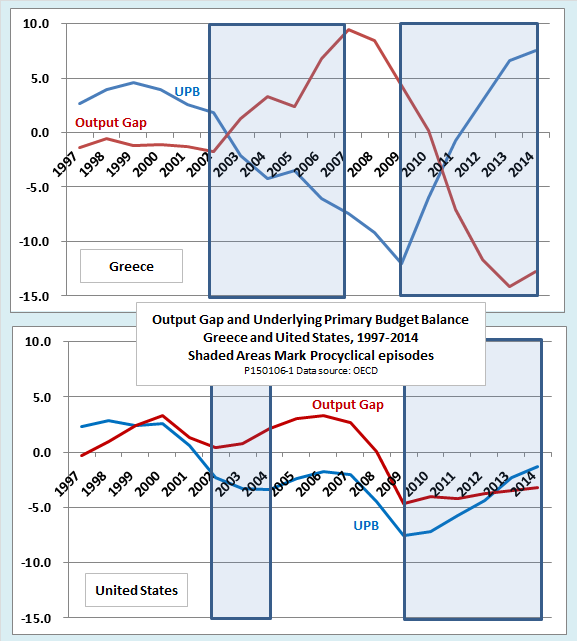 The snap election in Greece is shaping up as a referendum on five years of austerity that many Greeks view as a disaster. The US economy is much healthier, but that has not stopped many American economists from arguing that fiscal policy here has been little better than that of Greece (see this post by Paul Krugman, for example).

In both countries, critics charge that fiscal policies have been procyclical. By this, they mean that overly expansionary policy set up the crisis by amplifying the boom, while ill-timed deficit cutting since has deepended the recession and slowed the recovery. Are they right? The following charts tell the story.

The first indicator in each chart is the output gap. The gap is the amount by which real GDP is above or below a long-run trend, known as potential real output, that is estimated to be consistent with full employment and price stability.

The second indicator is the underlying primary budget balance (UPB). The UPB is the surplus or deficit of the budget that is adjusted for the effects of the business cycle on tax revenues and cyclically sensitive spending like unemployment benefits. It also omits interest payments on government debt, and one-off measures like privatization or tax amnesties. (Without the adjustment for one-off measures, the UPB is called the cyclicaly adjusted primary balance or structural primary balance. One-off measures are insignificant for the United States but important for Greece.) >>>Read more