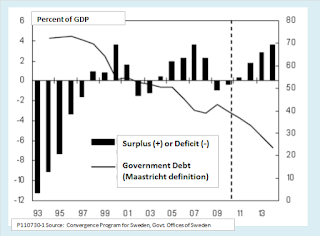 Almost three decades ago, Herbert Stein, the former Chairman of Nixon's Council of Economic Advisors, lamented that the United States had no long-run budget policy—no policy for the size of deficits and for the rate of growth of the public debt over a period of years. He pointed out that Congress makes annual budget decisions that are wholly inconsistent with professed long-term goals, hoping that something will happen before a point of crisis is reached. He might have added that when the crisis does arrive, it is resolved by a combination of hasty, one-off measures; the making of promises that are rarely kept; and the appointment of special commissions whose advice is rarely heeded.

What Stein said then remains true today. The rational way out of this destructive cycle of irresponsibility and crisis is to establish long-term fiscal policy rules and stick to them. There is at least a vague recognition among some members of Congress of the need to do so. The problem is that the rules they actually propose are primitive and counterproductive. The debt ceiling itself, which Congress routinely sets at levels that are inconsistent with its own spending and taxing decisions, is one such rule. The balanced budget amendment championed by many fiscal conservatives is also deeply flawed, for reasons detailed in this earlier post.

Instead of these "dumb" fiscal policy rules, we need to be looking at what can be learned from countries that have faced the same problems and introduced smarter rules to overcome them. Last week's post examined how intelligent budget rules have helped Chile prosperhttp://dolanecon.blogspot.com/2011/07/how-intelligent-budget-rules-help-chile.html. Today we look at the smart fiscal rules that have put Sweden's budget on a sustainable path and made that country's economy one of the strongest in Europe.


American conservatives still sometimes mock Sweden as failed experiment in socialism, but the reality, especially under that country's current center-right government, is quite different. True, Sweden's public sector is larger than that of the United States, although the gap is not as wide as some people imagine. When all levels of government are included, the share of government expenditures in GDP is 52 percent in Sweden compared to 41 percent in the United States. Somehow, though, the burden of government spending has not crushed Sweden's economy as completely as might be thought.

Sweden has not always kept its fiscal house in order, however. In the early 1990s, it faced a severe budget crisis. Since that time, as the following chart shows, it has made a remarkable turnaround. The principles of fiscal policy that have underpinned Sweden's fiscal consolidation have four main elements. Together, they represent a successful balance between discipline and flexibility.

The first element is a rule requiring a budget surplus equal to 1 percent of GDP on average over the business cycle. On the face of it, that sounds very much like Chile's structural balance rule. It would, in fact, produce a similar trajectory for the deficit and debt over the long run. However, the Swedish rule is more flexible than the Chilean version in two respects. For one thing,  it allows more room for countercyclical policy, since the government can, if needed, run a structural deficit during a downturn provided it is offset by a correspondingly greater surplus during the next expansion. Also, under the Swedish rule, year-to-year budgeting is not as closely dependent on estimates of the output gap, a concept that is difficult to define and measure with precision.

The second element of Swedish fiscal policy is a system of annual expenditure limits. Those limits provide a measure of discipline to prevent abuse of the greater flexibility implied by a multi-year, cyclical target for the budget balance. Each year a spending target is set for the third year ahead, so that budgeting for each current year is constrained by the target set three years previously. The purpose of the spending cap is to counteract the universal tendency of democratic governments to spend extra tax revenue as it comes in during years of economic expansion, rather than running surpluses as required for proper countercyclical fiscal policy.

The third element of the Swedish system is a budget margin to prevent the spending cap from being too rigidly binding. The budget margin is not a formal rule, but rather, a general principle under which planned expenditures are not pushed right to the limit of the annual spending cap. That is especially important because the spending cap is set in nominal terms, so that faster than expected inflation, as well as unexpectedly high real expenditures, could lead to a breach of the cap.

The fourth element of the system, which was added in 2007, is a Fiscal Policy Council, six of whose eight members are academic economists. The FPC has several functions. The most important is to assess whether the government's policies are in fact consistent with the fiscal policy targets, including the cyclical surplus requirement and the annual spending caps. In addition, the FPC has a role in evaluating the government's models and forecasting methods, in promoting transparency in the whole budget process, and in reviewing policies and targets in the light of long-run goals of growth and stability. Sometimes it offers specific advice. For example, during the 2008 downturn, it recommended that the government make fuller use of its right, within the rules, to allow a temporary cyclical deficit.

Does this system work? It seems to, at least for Sweden. Are there lessons here for the United States? Yes, but with some qualifications.

The first lesson (to preempt any anyone who is getting ready to blast me for advocating a socialist welfare state), is that the Swedish fiscal model in no way depends on a specific level of government spending. Rather, it depends on maintaining a rational balance between revenue and expenditure over the business cycle. Whether that balance be achieved with government expenditures that average 52 percent of GDP or 18 percent, whether it be achieved with or without universal affordable health care, state-provided day care, and so on, is another matter altogether.

The second lesson is the need to strike a balance between flexibility and discipline. The appropriate balance may vary from one country to another. For example, as I have noted, Sweden's approach has a bit more flexibility in allowing for countercyclical policy and a bit less year-to-year discipline than Chile's. A set of rules for the United States might also need to be tilted more toward discipline.
There are two reasons the United States may need more fiscal discipline even at the expense of flexibility. One is the two-year U.S. election cycle, the shortest among the world's major democracies. The short election cycle increases the pressure for government to spend increased revenues during an economic expansion rather than running the surplus needed for sustainable fiscal policy. It may be that the U.S. political system is not mature enough to think three years ahead.

Another reason the United States needs to tilt toward discipline is a lower level of political consensus. In Sweden, the major political parties agree on the importance of following the rules. Look again at the chart of Sweden's debt and deficit since the fiscal reforms of the mid-1990s: The chart shows no sign of any disturbance when the government changed from Social Democratic to center-right in 2006. Compare that to the radical change change from the budget discipline of the Clinton years to the fiscal irresponsibility of the Bush years. A very strong set of chains indeed would have been needed to prevent euphoric Republicans from squandering the once-in-a-lifetime budget surpluses they inherited after the election of 2000.

The third lesson is that although the United States may need a stronger dose of fiscal discipline than Sweden does, discipline can also be too tight. An example is the procyclical annual balance requirement embodied in the balanced budget amendment that is so enthusiastically championed by House Republicans. By requiring severe budget cuts each time the country entered a recession, such a rule would make the troughs of the business cycle deeper and recoveries slower. Far from bolstering confidence and promoting long-run growth, the proposed amendment would be a recipe for chronic instability and stagnation.

Finally, the most important lesson to be drawn from the Swedish experience is a hopeful one: Fiscal consolidation is at least sometimes possible in a modern democracy. Sweden's position in the early 1990s had some striking parallels with that of the United States today. It had experienced a sharp recession following the collapse of a housing bubble. Its banking system had nearly collapsed and required a costly government rescue. The deficit reached 11 percent of GDP and debt was around 70 percent, close to today's U.S. numbers. Yet the country got back on track. It established a set of budget rules that all political parties could live with. It was shaken by the 2008 global crisis, but recovered more quickly than most. It could happen here.