What Can the US Learn from Other Countries' Health Care Systems?

Even after the Patient Protection and Affordable Care Act (PPACA) of 2010, and in part, because of it, health care remains a major issue of public policy in the United States. It is central to ideologically charged discussions of fairness, the role of government, and even the budget, since the cost of health care is the single largest driver of the federal deficit. In confronting this complex and sensitive issue, it seems only reasonable that we ask what we can learn from the experience of other countries. As the first in an occasional series, this post will look at broad international comparisons of health care systems. Subsequent posts will examine what can be learned from individual countries.


To some on the right, the answer to what can be learned from other countries' health care experience is simple: Nothing! In a recent survey by the Harvard School of Public Health, 68 percent of respondents who identified themselves as Republicans maintained that the United States already has the best health care system in the world. (So did 32 percent of Democrats). There is a widespread view among conservatives that foreign health care systems are socialized medicine. Socialized medicine is bad. Don't go there. Keep the American way.

To some on the left, the answer is equally simple: Providing universal health care is just a matter of political will. Once the commitment is made to treat access to health care as a basic human right, everything else, including better health outcomes at a lower total cost, follows automatically.

To those on the right: Socialized medicine vs. the American way is catchy political rhetoric, but it has little descriptive value. The role of government varies widely among countries that offer universal health care—so widely that it is meaningless to lump them all together as "socialized medicine." In some countries the government pays the bills, in others, private insurers, and in still others, as in the United States, there is some of each. The same variety is found in other areas of government involvement, including pricing, choice of physicians, choice of treatments, and choice of drugs. What is more, even before passage of the PPACA, US government spending on health care, as a percentage of GDP, was already greater than total expenditure, public and private, in many countries with universal coverage.

To those on the left: Many countries do combine wider access to care with lower total costs and better outcomes, but none of those systems satisfies everyone. All countries face pressures from rising costs. All systems face tough decisions regarding treatments that are costly, but produce small or unproven benefits. All systems struggle with potential conflicts of economic interest between providers and patients. Furthermore, each society poses unique health care challenges. It is unlikely that any other country's health care system, if transplanted intact to the United States, would replicate the results in its home country.

So, does the United States have the best health care system in the world, or not?

There are certainly some good things to point to. The United States does have some of the best medical technology, best medical research, and best-trained doctors in the world. Most Americans, even those critical of the health care system as a whole, report that they are satisfied with the care they personally receive. Yet international comparisons consistently give the US system poor marks overall.

Perhaps the most widely cited study is one put out by the World Health Organization in 2000. Its headline rankings placed the United States 37th in terms of overall performance among 190 countries surveyed, just behind Costa Rica and just ahead of Slovenia and Cuba. France was first and Myanmar last.

To be sure, the WHO ranking has its critics. It is based on a weighted average that combines measures of population health, distribution of health care services, fairness of the financial burden of providing them, and efficiency. The resulting index is subject to several paradoxes: Because of its emphasis on equality, a country with uniformly bad health care could rise in rank relative to one with good health care for the poor and excellent care for the rich. Because it gives a substantial weight to efficiency, a country with excellent care obtained at great expense could rank lower than one with mediocre outcomes attained very cheaply. A country with good health habits in areas like diet and tobacco use could be ranked more highly than one with worse habits, but better treatment for the resulting medical conditions. A 2008 study from the Cato Institute provides a detailed discussion of these and other problems of the WHO rankings.

Although the WHO survey has its methodological problems, many people would still agree, in principle, that a health care system can't be called the best unless it provides good care to all at a reasonable cost. Others, though, would prefer a less subjective measure that focuses on the effectiveness of care. That is the approach taken in a study by Ellen Nolte and C. Martin McKee, both of the London School of Hygiene and Tropical Medicine. Nolte and McKee focus on amenable mortality, that is, deaths among people under 75 that could be prevented by timely and effective medical treatment, for example, deaths from infections, treatable cancers, diabetes, and heart disease. Their study covers the United States, fourteen European countries, Canada, Australia, New Zealand and Japan. Data for 1997-98 and 2002-03 were compared to capture rates of improvement as well as levels of mortality.

Nolte and McKee's findings, shown in the following chart, do not support the claim that the United States has the world's best health care system. In 1997-98, the United States ranked 14 out of the 19 countries surveyed. Over the next five years, all countries improved their amenable mortality rates. For the most part, countries that had performed poorly in the earlier ranking made the largest gains. The United States was the exception. Although its performance was well below average to start with, its improvement over the next five years was the smallest of any country. As a result, its ranking fell to dead last by 2002-03. 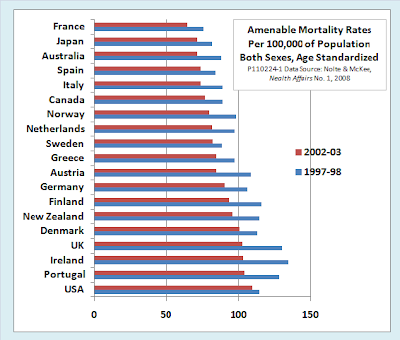 Let's turn now to the issue of cost. While the WHO rankings can be criticized for paying too much attention to cost, the amenable mortality approach can be criticized for paying too little. It could well be that some countries have worse health care outcomes because their spending priorities lie elsewhere. For example, the United States has poor passenger rail service and lots of risky dams, but that is mainly because we have decided not to spend much in those areas.

Unfortunately, the same is not true of health care. The US health care system performs poorly not because we spend too little on it, but despite the fact that we spend more on it than anyone else. The next chart shows some data. France, which scored first in both the WHO rankings and the amenable mortality study, spends only two-thirds as much as the United States. Japan, second in the amenable mortality ranking, and Italy, second in the WHO ranking, spend barely more than half as much. 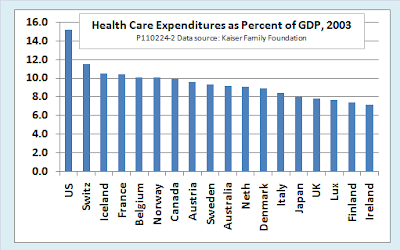 The fact that so much is spent without achieving better results suggests to some that the US health care system is uniquely inefficient. A paper by economists Alan Garber and Jonathan Skinner points to two possible kinds of inefficiency that could explain the results. One is productive inefficiency, which would occur if more capital and labor were required to provide a given service, say implanting a stent or administering a course of antibiotics. The other is allocative efficiency, which would occur if each given medical procedure were efficiently produced, but too much was spent on procedures that provided little benefit compared with their cost.

Comparing the US system to those of other countries, Garber and Skinner's study finds some evidence for both kinds of inefficiency. Higher administrative costs than in other countries suggests productive inefficiency. A tendency toward rapid adoption of expensive new therapies in advance of evidence that they produce significantly improved outcomes suggests allocative inefficiency. Their study also suggests that even when health care resources are used efficiently, their relative prices in the United States are higher than elsewhere.

What, then, is the bottom line? What can we take away from broad, multinational comparisions of the US health care system with those of other countries?

First, we learn that there really is a problem. True, the question, "Whose health care system is best?" is not sharply defined. By playing around with the weights given to coverage, efficiency, medical effectiveness, and fairness, we can get widely different rankings. However, no matter how deftly the data is massaged, it is hard to find empirical support for the claim that the United States has the world's best health care system. That means there must be something we can learn by studying the experience of others.

Second, although broad, multinational comparisions confirm that there is a problem, they suggest few specific solutions. They reveal no magic bullet, no single factor that determines whether a country's health care system works well or poorly. Making the US health care system work better will require multiple, well-coordinated reforms across a broad front, including many areas that the PPACA does not even attempt to come to grips with. Future posts in this series will examine specific strengths and weaknesses of other health care systems with an eye to generating recommendations for improving our own.

Follow this link to view or download a brief slideshow with additional data on international health-care comparisons.
Posted by Ed Dolan at 9:41 PM