As the federal budget season moves into full swing, infrastructure is not only on the table, but in the center of the table. The Obama administration budget, which would cut some areas of spending and freeze others, calls for more infrastructure spending, including high-speed rail, wireless Internet, and modernization of the electric grid. Across the aisle, House Republican leaders, vowing to "leave no stone unturned and allowing no agency or program to be held sacred," envision infrastructure cuts, including Amtrak, EPA grants for municipal clean water, and other programs. Some Republicans want to outdo the leadership and cap federal spending at 20 percent of GDP, something that would require even more drastic infrastructure cuts.


A good place to start is to ask why we are concerned with the budget deficit in the first place. The cliché is that we do not want to be the first generation to leave our children a national balance sheet with a thinner margin between assets and liabilities than we inherited from our parents.
The trouble is, the federal budget deficit is not the only thing that shapes the national balance sheet. There is also an infrastructure deficit--the difference between what the country invests each year in new bridges, sewers, and power lines and the rate at which the old ones fall apart. If investment in infrastructure exceeds depreciation, the country is that much richer at the end of the year. If depreciation exceeds investment, it is poorer, as surely as if the Treasury sells bonds and uses the proceeds for the most shortsighted spending programs you can think of.

If you have any doubt that the infrastructure deficit is real, try taking a look at the Report Card for America's Infrastructure published periodically by the American Society of Civil Engineers (ASCE). The Report Card assigns grades of "A" through "F" to various infrastructure categories. In the latest report, no area rates higher than a "C+." Roads, aviation, and transit system all declined in score from the previous report, which was issued in 2005. Dams, schools, drinking water, and wastewater stagnated at grades of D or lower. Just one category, energy, improved, from a D to a D+.

Consider dams, for example. There are more than 85,000 dams in the United States with an average age over 50 years. Some 4,000 dams are rated as deficient, including 1,819 high hazard dams. As the following chart shows, for every deficient high hazard potential dam repaired in recent years, two more were declared deficient. 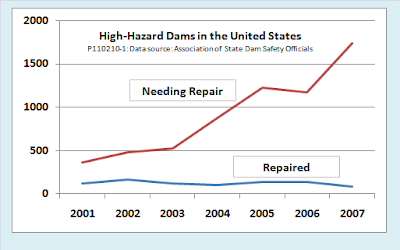 These realities suggest why we have to be very careful when cutting infrastructure spending. Cuts to essential repairs and upgrades will decrease the federal budget deficit only at the cost of increasing the infrastructure deficit. The trade-off is especially unfavorable when deferred maintenance leads to costly catastrophic failures. And realistically, just eliminating the infrastructure deficit isn't enough. Future economic growth will require an infrastructure surplus, so that wireless communication networks and renewable energy grids can be built at the same time needed repairs are made to aging sewers and bridges.

Still, although cut, cut, cut is not the right approach to infrastructure, spend, spend, spend isn't the answer, either. The problem is, not all infrastructure projects are created equal. Spending on roads, sewers, and parks has a reputation for pork-barreling and corruption that is all too often deserved. If your community is anything like mine, you probably can't drive to the store without "benefiting" from some infrastructure project that has no visible purpose other than generating revenue for some politically connected contractor. Is there any way to separate the wheat from the chaff?

Another useful infrastructure report, this one from the Bipartisan Policy Center, tries to address that question. Although it focuses specifically on transportation infrastructure, it makes some common sense recommendations that are more widely applicable.
Unfortunately, these principles are easier to state than they are to implement. At present, the government's budget process seems to be moving away from them, not toward them. Since the onset of the global economic crisis, far too much infrastructure money has been spent on an ad-hoc basis, with specific projects thrown in as "sweeteners" to get bills like TARP and the ARRA through Congress or added as earmarks to unrelated legislation. Congress seems completely to have abandoned the kind of orderly budgeting-authorization-appropriation process that is supposed to allow considered evaluation of individual spending proposals. Instead, we get omnibus spending bills and across-the-board freezes that spend and cut without any sense of priorities.

In short, dams and electric grids are not the only things in need of essential upgrades. President Obama is right that "we can't expect tomorrow's economy to take root using yesterday's infrastructure," and that goes for the infrastructure of budget policy rules, too.

Follow this link to view or download a short slideshow on infrastructure spending.
Posted by Ed Dolan at 10:04 PM