The Scissors of Supply and Demand are Cutting Carbon Emissions, but Not Fast Enough

Since the time of Alfred Marshall, more than a century ago, economics professors have taught their students that markets are like scissors: They have a supply blade and a demand blade that work together to determine prices and quantities.

An example of the scissors at work can be found in a new report on greenhouse gas emissions from the Rhodium Group.

The report is a classic case of good news and bad news. The good news is that overall U.S. GHG emissions fell by 2.1 percent in 2019. The evidence makes clear that both blades of the scissors are doing some cutting.

Looking first at the demand side, we see that the decrease in total emissions comes despite an estimated 2.3 percent increase in U.S. real GDP last year. Together, the 2.1 percent drop in emissions and the 2.3 percent growth of GDP mean that emissions per dollar of GDP fell by a far-from-trivial 4.4 percent. American industries and consumers are finding that they don’t need to pump out the same amount of pollution they used to in order to maintain equivalent levels of production and consumption.


Switching to the supply side, the Rhodium data tells us where the GHG reductions are coming from: falling prices charged by suppliers of clean renewable power and sort-of-clean natural gas. The following chart shows the extent of the shift in sources of supply – all the more remarkable since it comes in the face of determined efforts by the administration in Washington to prop up the coal industry. 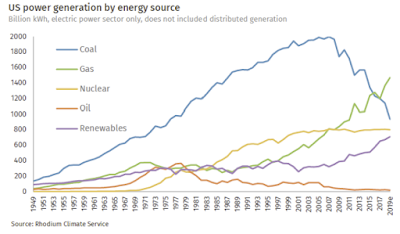 The bad news is that emissions are not falling as fast as they need to. We can see that from another of the Rhodium charts. This one shows that although the United States veered back in the right direction relative to commitments made in the Paris agreement, it did not veer sharply enough to make up for lost ground. 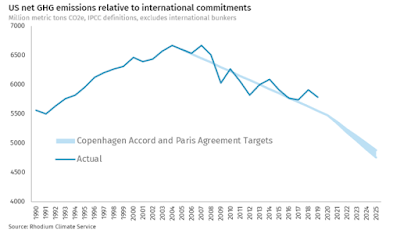 The bottom line: The scissors of the market economy are working. Both the supply blade and the demand blade are cutting away at U.S. greenhouse gas emissions. The bad news is, they are not cutting fast enough. Just think how much faster they would do their job if only we had a carbon tax!