On Tuesday, the Census Bureau released the latest data on poverty and income distribution for U.S. households. They show small improvements for 2018 compared with the year before, as would be expected with unemployment nearing 50-year lows. However, the short-term gains were not large enough to constitute a break with long-term trends.

One piece of welcome news was a drop in the percentage of people living in poverty from 12.7 percent in 2017 to 11.8 percent in 2018. Still, as the following chart shows, the 2018 poverty rate remains above the lows reached in the 1970s and again at the turn of the century. The longer-term trend of the official poverty rate since the late 1960s remains upward even when recent decreases are taken into account. 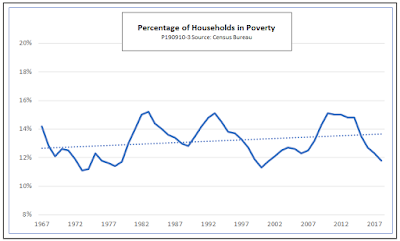 The official poverty rate is only one of several ways of looking at income distribution in America. The Gini index provides another perspective. This statistic varies from a possible value of zero, when distribution is perfectly equal (like a cake cut into equal slices) and 100 for a winner-take-all situation (like a hand of poker where the winner gets everyone else’s chips). The same statistic is sometimes on a scale of zero to one, in which case it is called the Gini coefficient or Gini ratio.

The latest reading for the U.S. Gini index is 48.6, down fractionally from 48.9 the previous year. As shown in the next chart, income inequality has been on a long upward trend in the United States. Half a century ago, the Gini index was a full ten points lower than it is today. 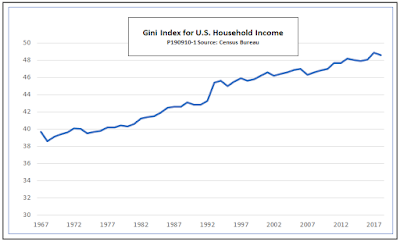 We can put the data in a wider context with the help of data from the CIA World Factbook. Drawing on various data sources, the Factbook reports a U.S. Gini index of 45 for 2007 — about the same as Saudi Arabia or Mozambique. South Africa, with a Gini index of 63, is the most unequal of the world’s major countries. For comparison, France, Denmark, Germany, and several other wealthy democratic countries have Gini indexes in the 20s.

The value of a country’s Gini index is heavily influenced by data from the middle class. Another way to look at inequality is to focus on only the richest and the poorest households. The next chart includes two such data series. The first shows the percentage of total income earned by the top 5 percent of U.S. households. The second shows the ratio of the income share of the richest income decile to that of the poorest decile. Both measures have climbed steadily over the years, despite slight decreases from 2017 to 2018. 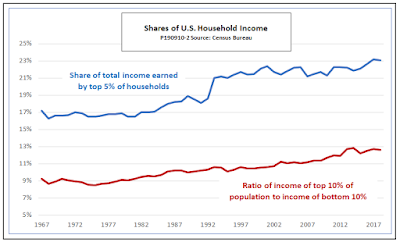 Finally, it is informative to look not just at ratios and percentages, but at the spread of absolute levels of income. The next chart shows inflation-adjusted household incomes for population quintiles and for the top five percent. The chart shows at a glance how top earners have claimed the largest share of overall increases in income over the past half century. Gains farther down the income scale are much less impressive. 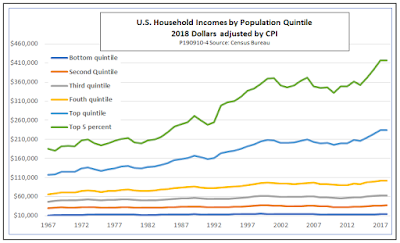 The bottom three lines in the preceding chart are so close to flat that it is hard to make out the direction of recent trends. For example, although you can hardly see it from the chart, a closer look at the underlying data show that real incomes of the lowest fifth of U.S. households reached an all-time high way back in 1999 and have decreased since then by about 8 percent. The second quintile has fared only slightly better, with an income increase of only 1 percent over the past 20 years. The next chart directly compares the percentage gains in income since 1999 for income quintiles and for the richest 20 percent of households. 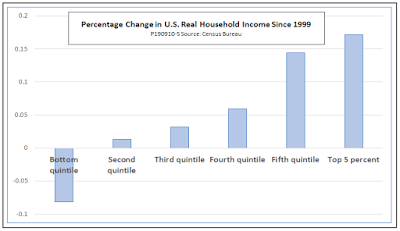 The bottom line: The United States paradoxically combines a level of overall wealth characteristic of the world’s most prosperous democracies with a level of inequality more commonly found in much poorer countries of the developing world. Furthermore, we are becoming more of an outlier as time goes by. Trends in inequality conspicuously do not cycle up or down according to the party in power in Washington. They seem structurally embedded in the U.S. economy. It will require fundamental reforms if these established trends are ever to be broken.