Yet, if we look at the data, the rise in multiple jobholders looks less dire than these accounts suggest. The first thing we learn is that although multiple jobholders are not rare, they are not as common as the impression you might get the media. Currently, multiple jobholders account for just 4.8 percent of the labor force. These include 2.6 percent who hold a part-time job in addition to a full time job — a pattern called FT/PT — and another 1.1 percent who piece together two or more part time jobs, or PT/PT. Smaller numbers work two full-time jobs or hold multiple jobs that are unclassified because they vary in hours from week to week.


The second thing the data tell us is that not every multiple jobholder is a hardship case. The BLS does not report people’s reasons for holding multiple jobs on a monthly basis, but an occasional survey, taken in 2004, sheds some light on the question. At that time, 25.6 percent of those surveyed said they needed the job to meet regular expenses or pay off debt — the answer we would expect a moonlighting teacher like Shauntel Highley to give. Another 21.3 percent appeared motivated mainly by the value of the second job itself rather than the money it brought in. These included people who took a second job to gain experience, to build a business, or because they enjoyed the work. A third group, 38.1 percent of the total, simply said they wanted the extra income without saying why. Maybe they, too, needed the money desperately, or maybe they wanted to take a cruise or buy a fancier car. The remaining 15 percent gave other unspecified reasons or no reason.

The third thing we find is that the different categories of multiple jobs give different signals regarding the health of the labor market. As the following chart shows, the FT/PT category rises in good times like the mid-2000s and the present, and falls in hard times like the years following the 2008 financial crisis. Over the quarter century for which data are available, there is a substantial negative correlation between FT/PT jobs and the unemployment rate (R = -0.50). The number people with a full-time job and another part-time on the side rises when the unemployment rate falls, and falls when the unemployment rate rises. The smaller PT/PT category, in contrast, shows no statistically significant correlation with the overall unemployment rate over the period covered in the chart (R=0.02). 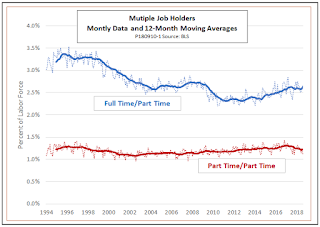 It seems, then, that the more typical case for a full-time — part-time worker is less one of desperation than of the more nuanced situation illustrated by this anecdote from USA Today:

Michael Alfaro, 49, of Coloma, Mich., toils full-time as an executive customer service representative for an appliance manufacturer. And on most evenings and some weekends, he works the late shift — 6 PM to 10 PM or 4 PM to midnight — in the electronics department of a local department store.
Alfaro decided to take the gig last November to whittle down about $37,000 in debt, including credit card, and student and personal loans. But he also was spurred by the struggles of area retailers and other businesses to find employees.
“It encouraged me,” he says.

Alfaro’s case fits the common pattern identified in the 2004 BLS survey — that of someone working a second job to get extra money. We could say that is “hardship” in the sense that if wages everywhere were higher, maybe the Alfaro’s of the world would not need to run up as much debt or take a second job to pay it off. That characterization fits the situation of many teachers, especially in states where salaries are not keeping up with inflation. However, it does not fit Sri-Kumar’s belief that rising FT/PT jobholders are a sign of economic weakness. Rather, those data are a sign of strength. It is the robust labor market that gives workers like Alfaro a chance to catch up on their debt before the next downturn comes, at which point the opportunity for a second job might disappear altogether.