Does the Government That Governs Least Really Govern Best? A Quick Look at the Data.

Libertarians are fond of quoting Henry David Thoreau’s aphorism, “That government is best which governs least.” Thoreau was evidently paraphrasing his contemporary John O’Sullivan, but no matter who first said it, the quotation has become an axiom of those who love freedom. But is it true?

Let’s treat this aphorism as a hypothesis and test it against the data. To know what data we want, we first need to decide just what we mean by “best government” and “least government.”

“Best government” could mean one of three things:
Libertarians typically interpret “least government” to mean “small government.” We will use two alternative measures of size:


Now we are ready to test several versions of the hypothesis, “That government is best which governs least.” Let’s begin by interpreting this to mean that smaller government tends either to produce greater human prosperity as measured by Legatum’s LPI or greater human freedom as measured by Cato’s HFI. Here are the relevant scatterplots, based on a sample of 143 countries, using SGOV, the IMF measure, for size of government:

The plots do not support the hypothesis that small government produces either greater prosperity or greater freedom. (In reading the charts, remember that the SGOV index is constructed so that 0 indicates the largest government and 10 the smallest government.) Instead, smaller government tends to be associated with less prosperity and less freedom. Both relationships are statistically significant, with correlations of 0.43 for prosperity and 0.35 for freedom.

Using SoG, the Cato measure of size of government, instead of SGOV, the IMF measure, does not help. The correlations turn out still to be negative and statistically significant, although slightly weaker.

Let’s turn now to the alternative hypothesis that quality of government, rather than size, is what counts for prosperity and freedom. Here are those scatterplots:

This time, both relationships are positive. High quality of government is strongly associated both with greater human prosperity and greater human freedom. Furthermore, the correlations are much stronger than those for the size of government.

But wait a minute. Before reaching any conclusions about the relative importance of size and quality of government, shouldn’t we should look at the relationship between those two variables? Could it be, for example, that quality matters, but also be true that small governments tend to be high quality governments? If so, then small government might still contribute to prosperity and freedom, but in a way that is statistically masked when we plot SGOV in isolation against either LPI or HFI.
However, that turns out that small governments do not, on the whole, tend to be of better quality. Here is what we get when we plot quality against size of government: 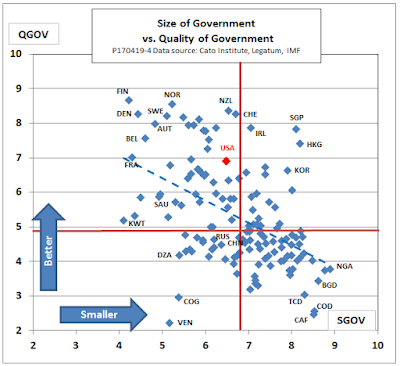 To help with interpretation, this figure ads labels to some of the data points. The red lines divide the figure into quadrants according the median values for size and quality of government. A trend line runs roughly from France to Nigeria. The correlation is definitely negative: Smaller governments (those to the right of the figure) tend to have lower quality. The relationship between the two variables is statistically significant, with a correlation of -0.48.

The governments with the highest quality scores are found among those in the northwest quadrant – the largest governments as measured by expenditures relative to GDP. It is no surprise to find a cluster of Scandinavian countries there, with some of their fellow EU members not far away. Farther to the right lie New Zealand and Switzerland (CHE), two countries with well-run governments that are close to the median size. The US government is also close to median size. Its quality score is a little lower, but still well above the trend line. In the same quadrant, but below the trend line—large but lower-quality governments—we find Kuwait and Saudi Arabia. Some of the other Gulf States are in the same neighborhood.

The northeast quadrant is more sparsely populated. The outliers here are Singapore and Hong Kong, countries with governments that are well run, but small in terms of expenditures. South Korea also falls into this quadrant, as does Ireland, which has a high-quality government that is relatively small by EU standards.

Moving to the southeast quadrant, we find countries that have small but low-quality governments, such as Nigeria, Democratic Republic of Congo, Chad, Central African Republic, Bangladesh, and others. These countries are also among the poorest on the planet in terms of per-capita GDP and indicators of human flourishing.

Finally, in the southwest quadrant, we find the sorry example of Venezuela – this decade’s poster child for socialism gone bad. North Korea would probably be nearby, but we don’t have enough data to include it in the sample. Russia and China are also in this quadrant, but much closer to the center, with both size and quality of government close to the median.

This post originally appeared in this form on Medium. For more details on data and methodology, read this two-part series: “Freedom, Prosperity, and Big Government,” and “Quality of Government, Not Size, Is the Key to Freedom and Prosperity.”