Economic vs. Personal Feedom in Singapore 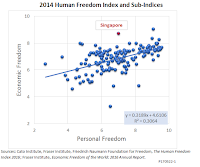 Today’s New York Times carries an op-ed by Singaporean novelist Balli Kaur Jaswal on censorship in her home country. It begins by describing the deletion of scenes from American TV shows that feature taboo subjects like vibrators and nonbinary gender identification. It continues with a tongue-in-cheek account of her efforts, together with high-school friends, to figure out just what “sex” was by raiding their mothers’ stashes of contraband women’s magazines. But the real point of the op-ed is a serious one: In Singapore, freedom of information is spotty, at best.

The story sent me running to one of my favorite data troves: The rich collection of statistics on economic and personal freedom put out by the Cato Institute’s Freedom of the World project. Singapore is famous for its economic freedom. On the Cato economic freedom scale, it earns a score of 8.71 out of a possible 10, second only to Hong Kong’s 9.03. The high rating is helped along by sound money, free trade, and a small government, along with perfect 10s in areas like freedom to dismiss workers, freedom from minimum wage requirements, and freedom to practice your chosen profession without a license. These economic freedoms pay off in terms of prosperity. Singapore’s GDP per capita is third in the world, after Qatar and Luxembourg.

When it comes to personal freedom, though, it’s another story. On Cato’s personal freedom index, Singapore ranks seventy-seventh out of 159 countries, a little better than Cambodia or India, but not as free as Turkey or Papua New Guinea. What’s the problem?

Looking first at the factors that boost Singapore’s personal freedom rating, we find perfect 10s on important matters related to safety and security, including freedom from disappearances and civil conflicts. Homicides are rare. The civil and criminal justice systems are not perfect, but the country rates a respectable 8 out of 10 on the rule of law. So far, so good.

On the other hand, things fall apart when we turn to the issues discussed in Jaswal’s op-ed. Freedom of information earns only 5.6 points out of ten, pulled down by a dismal score of 2.0 on laws regulating media content. Freedom of religion scores only a 5 and freedom of assembly gets exactly 0.0 out of 10 on the Cato scale. Women’s freedoms are mixed. Divorce is easy and genital mutilation is unknown, helping the overall score, but inheritance rights of daughters and widows rate only 5's. Whether you’re a woman or a man, though, be glad if your sexual orientation and gender identification are securely traditional. Singapore’s scores for freedom of male-on-male and female-on-female relationships show complete equality—both perfect zeros.

Anyone who reads my blog regularly knows I’m rarely happy without a chart. Here is a snapshot of Singapore in the world freedom constellation, with my red highlights superimposed on Cato’s blue: 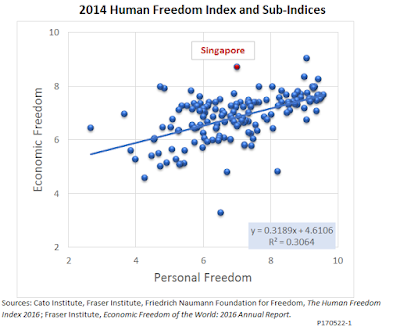 Kudos to Ms. Jaswal for her fine op-ed. And nice to know that the data back up her story.
Posted by Ed Dolan at 8:18 AM