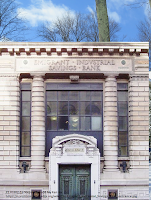 The downside of the traditional banking model is that a positive duration gap means that profits fall when interest rates rise.  Suppose, for example, that your bank makes 30-year fixed-rate mortgages and funds them with deposits that pay an interest equal to the federal funds rate (the rate on overnight loans that the Fed uses at its primary interest rate target). If the loans earn 4 percent and the fed funds rate is 0.5 percent, you have a nice spread of 3.5 percent  between return on assets and cost of funds, allowing a good profit even after deducting  operating expenses.  However, if short-term rates went up, your bank would be in trouble. If the fed funds rate went up to 2 percent while your old fixed-rate mortgages still brought in just 4 percent your spread would be cut to 1.5 percent and your profits, after operating expenses, might evaporate altogether.

Modern banks have ways to reduce the interest rate risk inherent in traditional banking. One of the simplest strategies is to make variable-interest loans. If your funds come from short-term deposits, forget fixed-rate mortgages. Instead, make loans with rates that reset every twelve months according the movement of the federal funds rate or some other short-term interest rate. Suppose that today, you are receiving 3.5 percent on your variable rate mortgages (a little less than if you would earn  on fixed rate loans), and you are paying 0.5 percent on deposits. Tomorrow, short-term rates go up and you have to raise your deposit rate to 2 percent, but you also reset the mortgage rate to 5 percent. Same 3 percent spread, same profit, as before.
More complex strategies make it possible for banks even to engineer negative duration gaps while still maintaining their traditional business of taking in deposits and making loans. A bank with a negative duration gap would profit from rising rates and suffer a loss if rates fell.

You get the idea: Banks do not have to passively accept lower profits when interest rates rise and wait for falling rates to boost their profits. Instead, they can adjust their strategies according to their market expectations and their appetite for risk.

A cautious bank would try to keep its duration gap short. Such a bank would earn a modest but steady profit regardless of what happened to rates.

Banks with a bigger appetite for risk can try to guess which way rates are moving. When they expect rates to go up, they can keep their gap short, or even negative gap. When they expect rates to fall, they can make lots of long-term, fixed-rate loans or use other strategies that lengthen the gap.  If they turn out to be right, they win big. If they are wrong, they suffer losses.

There is an important qualification, however. Trying to profit from interest rate movements depends not only on the accuracy of forecasts, but also on timing. For example, suppose I think that interest rates will fall. If they do, prices of long-term bonds will rise, since bond prices automatically move in the opposite direction from interest rates. If I am the first to act on this expectation, I can buy bonds cheap now, while rates are still low, and sell them at a higher price after the rate change. However, if other people already played the same hunch yesterday, the purchases they made to lock in their profits will already have pushed bond prices up, and I will have missed my chance.

In short, then, there is no reason to think that bank profits in general will increase either when interest rates rise, or when they fall. Cautious banks that keep their duration gaps short will not be much affected way or the other by rate changes. Banks that take risks based on their guesses about interest rate movements will make profits but only if their guesses are better than the average of others who are playing the same game.  Since Wall Street is not Lake Wobegon, not all banks can do better than average. Some will necessarily do worse than average, and their losses will offset the gains made by the winners.

The moral of the story: Take tidy explanations of stock price movements with a large grain of salt.