How to Facilitate a Liberal-Conservative Dialog on Climate Change 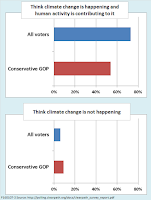 Can liberals and progressives talk to conservatives about climate change? Some on the left say, “No.” Theyhave the idea that it is a waste of time to bring conservatives into the discussion—conservatives have nothing to contribute, and they are all deniers anyway.
I disagree. Here is why I think discussion of the issue across political lines can be fruitful, if it is approached in the right way.

Why talk to conservatives about climate change?

The first reason for progressives to talk to conservatives, then, is that outright denial is out of fashion, at least if you believe data from surveys of public opinion. According to one recent poll, even among those who self-identify as conservative Republicans, some 54 percent believe that the earth is warming and that human activity is contributing to it. Only 9 percent of conservatives deny outright that climate change is happening.  As GOP presidential candidate Chris Christie has said, “Global warming is real. I don’t think that’s deniable. And I do think human activity contributes to it. The question is what we do to deal with it.”
Instead of denial, what we now have is a debate over the magnitude of the human impact on global warming. Climate sensitivity is a key concept in this debate. Climate sensitivity means the amount by which global temperatures increase for each doubling of the concentration of CO2 in the atmosphere. >>>Read more
Posted by Ed Dolan at 4:20 AM