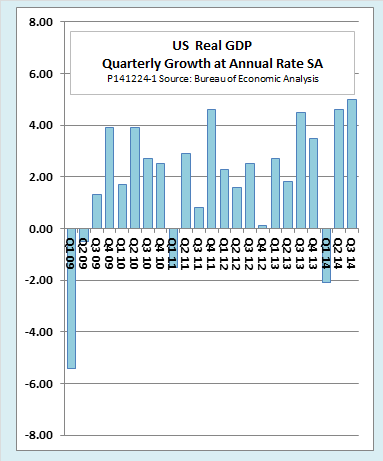 The US economy grew at a 5 percent annual rate in Q3 2014, the fastest rate of the recovery, according to the third estimate released yesterday by the Bureau of Economic Analysis. That is an upward revision from the 3.9 percent of the second estimate. It comes on the heels of a 4.6 percent growth rate in Q2, making it the fastest six-month growth spurt since the 1990s.

Consumer spending led the way, contributing 2.21 percentage points to the quarterly growth. Investment spending contributed 1.18 percentage points to GDP growth. Business fixed investment accounted for most of that. Residential investment was below average in the quarter, and inventories were essentially unchanged. Exports continued to expand and imports fell slightly. A spurt of defense spending raised the contribution of the government sector.

Inflation, as measured by the national accounts, remained moderate. The broadest measure of inflation, the GDP deflator, rose at an annual rate of 1.4 percent in the quarter. The deflator for personal consumption expenditure rose at a 1.2 percent rate. The PCE deflator is especially important because it is the preferred inflation indicator for the Federal Reserve. PCE inflation remains well below the Fed's 2 percent target.

The BEA will release its advance estimate for Q4 GDP at the end of January. Employment indicators for the final quarter have been strong, so it is likely that growth will continue through the end of the year, although most forecasters expect a slightly slower pace than in Q3.

Follow this link to view or download a brief slideshow with detailed charts of the latest GDP numbers.
Posted by Ed Dolan at 8:04 AM