Today’s report from the Bureau of Economic Analysis shows the US economy to be much stronger than previously thought. The advance estimate for the second quarter of 2014 showed real GDP expanding at an annual rate of 4 percent. The new data revised the dip in GDP for Q1 from -2.9 percent to -2.1 percent, and raised the estimated growth rate for three out of four quarters in 2013. The following chart shows previously reported and revised data for the past seven years. 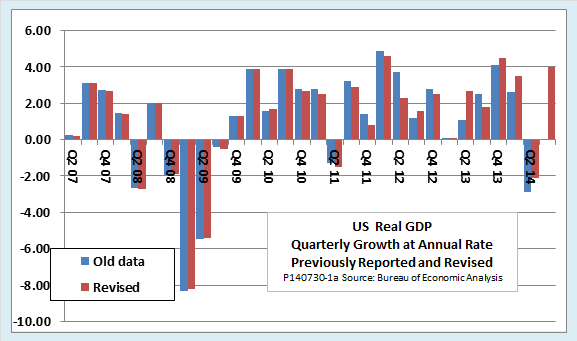 As the following table shows, the turnaround in the economy was very broadly based. Consumption contributed 1.69 percentage points to the growth of GDP, a little above the average of the past two years. Investment was very strong, contributing 2.57 percentage points to growth, far above its recent average. Both fixed investment and inventory investment reversed their declines of Q1. >>>Read more