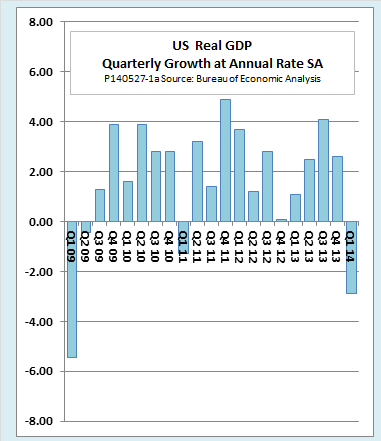 The third estimate of U.S. real GDP for Q1 2014, released this week by the Bureau of Economic Analysis, showed that the economy contracted at a 2.9 percent annual rate in the quarter. That was the fastest rate of contraction since the recovery began five years ago. The second estimate, released in May, had indicated a rate of contraction of just 1 percent.

The pause in the economic expansion had several causes. Unusually severe winter weather hurt the economy across the board. Exports, which had been a positive factor through most of the recovery, slowed sharply in the first quarter. A decrease in inventories adversely affected investment. Finally, although personal consumption continued to grow, the rate was slower than previously estimated, in part because of technical changes in the measurement of spending on healthcare.

The third revision confirmed a sharp decrease in corporate profits that had been reported previously. Profits fell by more than 9 percent before taxes, and nearly as much after taxes. Despite the drop, after-tax profits, which had been running at record levels in recent years, are still higher than the peak reached during the prerecession boom.

Observers believe that many of the factors leading to the first quarter decline in GDP are temporary. Relatively strong labor market performance during April and May make it very likely that growth will resume in Q2. Still, the weakness early in the year has caused the Federal Reserve to reduce its forecast of growth for the full year from a range of 2.8 to 3.0 percent down to a range of 2.1 to 2.3 percent.

Follow this link to view or download a classroom ready slideshow with additional charts and analysis of the Q1 2014 national income accounts.