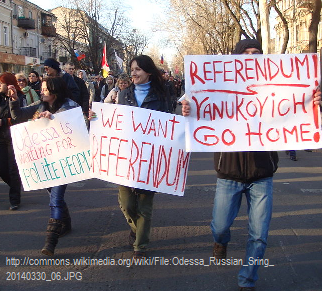 More votes are coming. Demonstrators in Eastern Ukrainian cities, encouraged by television and political tourists from the Russian side of the border, are demanding referendums similar to that in Crimea. Even if those do not come about, Ukraine as a whole will hold a presidential vote in May that will itself be seen as a referendum on a turn toward the East or toward the West. Whatever the circumstances, economic issues will be on voters’ minds as they set out for their polling stations. Which side of the scales do they weigh on?>>>Read more
Posted by Ed Dolan at 7:23 AM