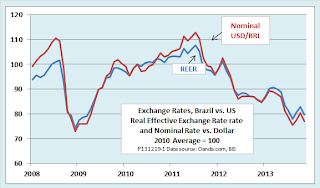 What explains the paradox that both appreciation and depreciation of a country's currency are both perceived as harmful to the economy? I wrote about this back in August when tapering was only a threat on the horizon. Now that it is actually about to start, the issue takeson a new relevance. Here is a somewhat abbreviated version of the earlier post. >>>Read more
Posted by Ed Dolan at 7:32 AM