Eurozone woes: France in Recession, Germany on the Skids, but Estonia and Malta are Doing Well

The latest data from Eurostat shows that fewer than half of the eurozone’s economies are now growing. Real GDP in the EZ as a whole was 0.4 percent lower in the first quarter of 2013 than a year earlier. The worst news came from the bloc’s biggest economies: Germany’s growth fell from 0.7 percent Y-o-Y in 2012 to 0.4 percent in Q1 2013. France slipped into negative territory with growth of -0.1 percent.

Prefer to look on the bright side? Tiny Estonia grew by a solid 3 percent, almost enough to offset the headlong dive of Cyprus, which clocked in at -8.7 percent.

Rather let the numbers speak for themselves? Here they are: 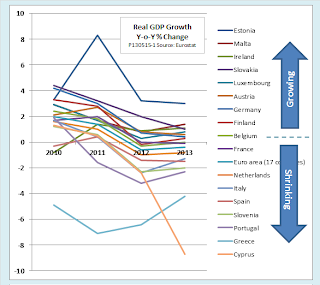 This item was originally posted to Economonitor.com