How Does the Obama Jobs Record Really Score Against Other Presidents? Let's Be Fair. 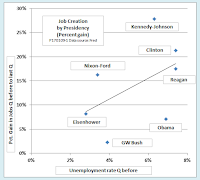 As Barack Obama prepares to leave office, there has been a lot of talk about his record of job creation. The raw numbers look pretty  good: Payroll jobs increased by some 11 million from the quarter before Obama’s inauguration to his last full quarter in office. That is the third best among the 12 presidents since World War II, surpassed only by 16 million jobs added under Reagan and 23 million under Clinton.

Not bad. Let’s give credit where credit is due. To be fair, though, the story is more nuanced than told by the headline numbers alone.

Lets start with three points that put the record of the outgoing administration in perspective:

Here is my comparison, then. Let’s chart the percentage gain in jobs over eight-year presidencies against the unemployment rate in the quarter before inauguration. That puts the onus of an early-term recession on the preceding president, but assigns credit or blame for the end state of the economy to the president who has been in office for two terms. Here is how that looks: 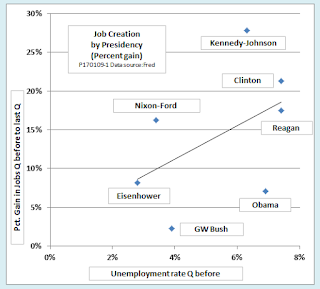 As expected, there is a positive trendline for this scatter plot. Although the relationship is not a tight one, on the whole, presidents who come into office when unemployment is high see more job creation than those who come in when there are fewer idle job seekers available for work. The excellent records of the Kennedy/Johnson, Clinton, and Reagan presidencies enjoyed the benefit of tailwinds. Eisenhower faced a stiff headwind, while Nixon/Ford and GW Bush got little help one way or the other.

And Obama? The unemployment rate was high when he came in, which should have made it easy to create lots of jobs. According to the chart, he should have been up there at or close to the trend line, somewhere near to Reagan. Actually getting there would have taken almost twice as many new jobs.

Well, you might say, at least Obama’s record beats W’s. But does it? It you take the tailwind effect seriously, you should measure performance by how far above or below the trendline a given president ends up. Obama comes in farther below the trendline than anyone. In that sense, his record is the weakest of any president of the post-World War II era.

Have I fiddled the numbers to make Obama look bad? Let’s try some variants. We could try using the unemployment rate in the inauguration quarter rather than the last quarter of the outgoing president for the horizontal axis. That would be 8.3 percent unemployment instead of 6.8 percent for Obama, and 4.3 rather than 3.9 percent for W. That adjustment, though, would actually make Obama’s record look worse, since it would show him even farther below the trendline, starting with a bigger tailwind, and would show W with only a slightly weaker headwind.

Maybe the unemployment rate is the wrong metric. After all, the level we consider as “full employment”—technically, the Nairu—varies over time. Instead, we could use the output gap on the horizontal axis. A negative output gap (deep recession) early in a president’s term makes job creation easy, and a positive early output gap (boom) makes it harder. However, when I ran the scatterplot using the output gap, it only confirmed the rankings based on unemployment.

What if we count four-year terms instead of eight-year presidencies? That does make a difference. By that metric, Obama’s first term is the very worst of all seventeen four-year presidential terms since World War II, slightly worse even than GW Bush’s dismal first term. But the four-year standard does make Obama’s second term look a little better. It comes in ninth out of the seventeen, putting it right in the middle of the pack, a little better than Reagan’s second term. 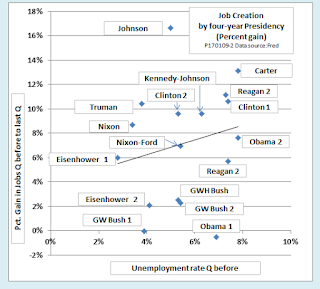 Even so, the unemployment rate was still very high, at 7.8 percent, in the last quarter of his first term, giving him a continued tailwind. As a result, his second term comes in slightly below the trend line. In fact, his two terms are the only Democratic presidencies in the whole period that came in below the line.

We still have not told the whole story, though. Offsetting these points, which do tend to tarnish the Obama record, there are three equally strong considerations that make it look better.

One is that twenty-first century demographics make it harder to get strong job growth. The aging population is the biggest factor. Also, presidents in this century do not benefit from the huge influx of women into the labor force that the country saw in the sixties, seventies, and eighties. Add in the opioid epidemic and other noneconomic factors that discourage many working-age men from seeking jobs, and you get some major demographic headwinds that don’t show up in our chart. Obama deserves credit for doing as well as he did against them.

Second, the political situation that Obama faced was not consistently favorable. He did manage to pass a strong stimulus package early in his first term. By his second term, though, he faced a Congress dominated by budget hawks and austerity nutters who, as I explained in this earlier post, insisted on premature withdrawal of fiscal stimulus. Even a consummate wheeler-dealer like Lyndon Johnson would have found it hard to get much out of that bunch. Tight fiscal policy put the whole burden of recovery on the Fed. Obama should at least get credit for having sense enough to keep Ben Bernanke (originally a Bush appointee) on as Fed Chairman.

Finally, the Obama job record compares unfavorably with that of earlier presidents, in part, because some of them oversaw employment growth that went beyond the limits of sustainability. Truman presided over a boom that sent GDP to a level 3.17 percent higher than its potential—well above what the economy could sustain without excessive inflation. Johnson left office with an output gap of +2.65 percent, Clinton with +1.73 percent, and Reagan with +0.59 percent. Although positive output gaps like those produce impressive job numbers, they contribute to a boom-bust cycle that is not good for the long-run health of the economy.

When the whole story is told, then, Obama’s record does not look so bad, after all. True, the 11 million new jobs, by themselves, are not that impressive. To be fair, though, we should say that his administration did rather well, overall, under difficult circumstances. At least, unlike too many of his predecessors, he leaves office with the economy in neither a deep slump nor an unsustainable boom.
Posted by Ed Dolan at 4:23 AM