Back in the 1960s, when inflation was soaring while unemployment remained stubbornly high, Arthur Okun invented the "misery index"—the sum of inflation plus unemployment. As inflation came under control after the early 1980s, we stopped hearing much about the misery index.

In truth, the misery index is not a bad concept as a rough indicator of the health of the economy. It needs one update, however. In Okun's day, it never occurred to anyone that inflation could be too low. Now, as the experience of Japan, the Eurozone, and to some extent, even the US shows us, deflation can be as much of a threat as inflation.

The Fed recognizes the danger of deflation by setting its inflation target of +2 percent, not at zero. Why not use this target to modernize the misery index? I suggest a "modern misery index" that is equal to the unemployment rate plus the absolute value of the difference between the current inflation rate and the Fed's 2 percent target.

Suppose unemployment is 5 percent. By Okun's old formula, inflation of  3.5 percent would give you a misery index of 8.5, but inflation of 0.5 would give you an index of just 3.5. By modern reasoning, an inflation rate that is a point and a half below the 2 percent target is just as much a source of alarm as one that is a point an a half above, so my modern misery index gives you 5  + 1.5 = 6.5 in both cases.

Here then, is what the modern misery index looks like over the past half-century: 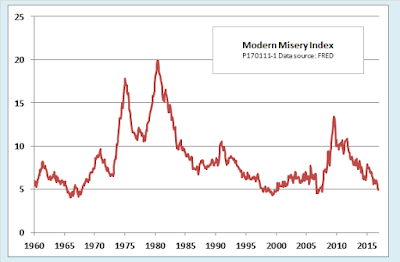 By this standard, the Great Recession still looks pretty miserable, although not quite as bad as the 1970s, when unemployment was even higher and inflation was out of control. Like several other indicators  (see here and here, for example), the modern misery index shows that the US economy has essentially completed its recovery to the best values of the 1990s and early 2000s.