Chart of the Day: Quits and Layoffs Show Labor Market's Return to Health

The unemployment rate, which stood at 4.7 percent in December 2016, is the most commonly cited indicator of the health of the labor market. The Fed considers an unemployment rate of 4.6 to 4.8 percent to be equivalent to full employment (or, to use the term favored by economists, the non-accelerating-inflation rate of unemloyment.) By that measure, the economy is in good shape.

Some economists, however, consider quits to be an even better measure of labor market health. Quits measure the number of workers each month who voluntarily leave their jobs. Quits fall during a recession because, when new jobs are scarce, few people want to give up a job they have. They rise during times of prosperity, because people are willing to leave their jobs when they think there is a good chance of finding another one.

As the following chart shows, as of October 2016 (the most recent available data), the number of quits had returned to the peak reached before the Great Recession began. Meanwhile, the number of layoffs and discharges had fallen below the prerecession low. 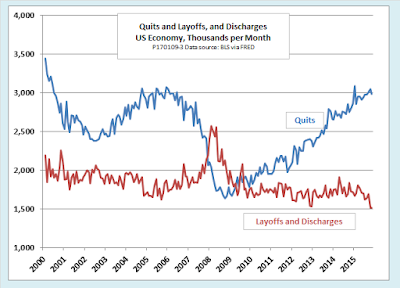