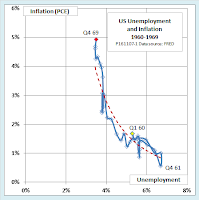 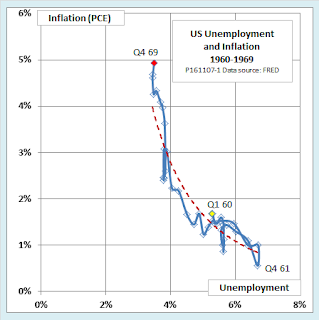 
Over the years, however, the behavior of inflation and unemployment has turned out to be far from consistent from one cycle to another. As the next chart shows, the Phillips curve shifted sharply upward in the 1970s. In more recent cycles, it is hard to find any trace of a classical negatively sloped Phillips curve. (For details, see this earlier post.) 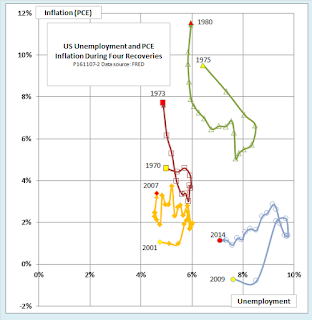 As the once-simple pattern of the Phillips curve disappeared, economists used a variety of statistical techniques in an attempt to extract estimates of the Nairu from data on inflation, unemployment, and other indicators. The results were not been entirely satisfactory.

Part of the problem is that the estimates have not been very precise. For example, one widely cited study concluded that as of the early 1990s, there was a 95 percent probability that the Nairu would fall in the range between 5.1 and 7.7 percent—a confidence interval so wide as to make the estimate of little practical use.

More importantly, the Nairu appears to vary over time. Reasons include the changing demographics of the labor force, changes in the rate of productivity growth, and changes in policy, such as the introduction of extended unemployment benefits during recessions. The next chart shows estimates by the Congressional Budget Office of variations over time in the Nairu (or natural rate of unemployment, as the CBO still prefers to call it). 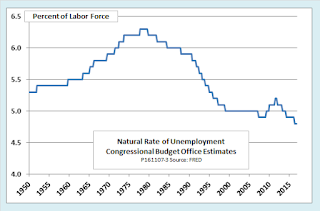 Of course, the CBO estimates are not the last word. Other estimates differ in some details but agree on the general pattern of an increase in the Nairu at the end of the 1970s, a long decline through the end of the century, and a smaller increase more recently during the Great Recession.  (For a full discussion of estimation problems, see Ball and Mankiw, “The NAIRU in Theory and Practice.”)

A case in point: The December 2016 decision

The Fed’s decision to tighten policy in December 2016 illustrates the importance of the Nairu. At the time, individual members of the FOMC proposed estimates of the Nairu ranging from 4.5 percent to 5 percent, with a mean value of 4.8 percent. Here is a bullseye diagram that I used at the time to show situation they faced. The dual mandate is represented by crosshairs centered on a Nairu of 4.8 percent and an inflation  target of 2 percent. (All data shown in the chart are quarterly, except for the last point, which shows the latest, still-incomplete data for the fourth quarter of 2016—unemployment of 4.6 percent for November 2016 and PCE inflation of 1.5 percent for October.) 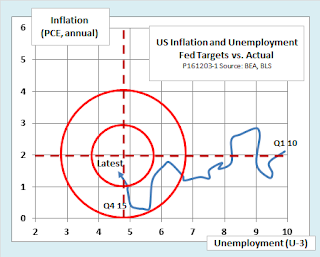 The chart shows rising inflation and an unemployment rate that has dropped below the Nairu for the first time since the beginning of the Great Recession. In fact, the economy’s track over the last year and a half looks more like a nascent Phillips curve than anything we have seen for decades. Given the time lag before monetary policy actually affects the economy, that was enough to persuade the Fed to resume tightening.
So keep your eye on the Nairu. Yes, it’s wonky, but it matters.

Follow this link to view or download an explainer slideshow on the Nairu, ready for your classroom or office presentation.
Posted by Ed Dolan at 4:07 AM