Chart of the Day: The Output Gap

The output gap is equal to the economy's actual real GDP minus its potential GDP. The gap is negative when the economy is in a slump an positive when it is in a boom. The following chart shows the output gap for the US economy from 2000 to 2016 as a percentage of potential GDP. The chart is based on actual real GDP as reported by the Bureau of Economic Analysis and potential real GDP as estimated by the Congressional Budget Office. (Data for Q4 2016 are the author's own preliminary estimates.) 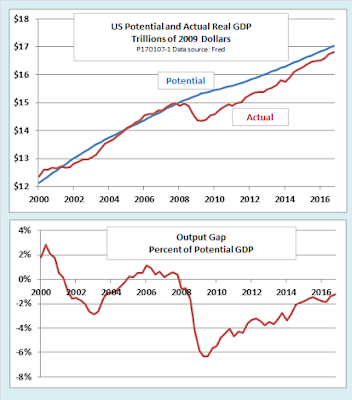 Related content: What is the Nairu and Why Does It Matter? An explainer slideshow from Ed Dolan's Econ Blog