Think You Are Fully Insured? You Could Be in for a Big Surprise

Think you’re fully insured? You could be in for a big surprise if you have a heart attack or a car crash and the ambulance takes you to the nearest hospital — one that is not on your insurer’s list of preferred providers.

Drew Calver found that out when he was billed $109,000 for emergency treatment of a heart attack, even though the emergency room he was taken to assured him it would accept his employer-provided insurance. The problem is, the insurer only paid as much as it would have allowed for an in-network hospital. The out-of-network hospital that treated him wanted three times as much, so it billed Calver for the balance. The bill came to more than twice his annual salary as a high school teacher.

Surprise medical bills are known in medical circles as “balance billing.” Emergency room treatment is one of the most common sources of surprise bills, but not the only one. You may also be on the hook for a balance bill if you receive a complex treatment like a joint replacement or transplant, even if the operation is done at an in-network hospital. Often, it turns out later that some out-of-network practitioner, such as a radiologist or anesthesiologist, has assisted without your even knowing about it, let alone having a chance to give or withhold consent.

A recent Kaiser Family Foundation poll placed surprise medical bills at the top of a list of financial fears for American families. Sixty-seven percent of respondents reported being very or somewhat worried about such bills, more than worried about prescription drug costs, deductibles, or premiums, let alone gasoline bills, utilities, food, or rent. 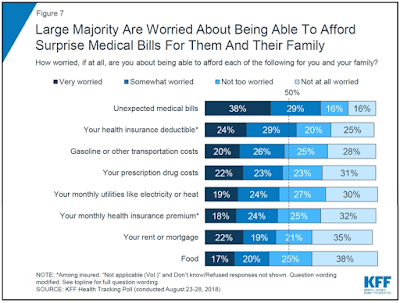 And balance billing seems to be on the increase. There are no official national statistics, but a 2015 survey by Consumers Union found that one-third of all people surveyed had received surprise medical bills in the preceding two years. One in four had not expected any bill at all from the provider in question.

As attention to the problem of balance billing has grown, some states have enacted laws to protect consumers. According to a report from the Commonwealth Fund, twenty-one states had such laws as of 2017. However, only six of those states provided comprehensive protection, and even then there are loopholes.

One of the loopholes — the one that tripped up Calver — is that certain types of employer-provided insurance are, by law, regulated at the federal level. Federal law, to date, offers no broad protection against balance billing. (Fortunately for older Americans, Medicare does prohibit the practice.)

That may be about to change, though. In September a bipartisan group of six Senators — Michael Bennet (D-CO), Tom Carper (D-DE), Bill Cassidy (R-LA), Chuck Grassley (R-IA), Claire McCaskill (D-MO), and Todd Young (R-IN) — introduced draft legislation that would offer the needed protection. If enacted, their Protecting Patients from Surprise Medical Bills Act would limit patient cost-sharing to the amount they would owe an in-network provider; set a payment standard regarding what insurers owe providers in these situations; and, prohibit providers from balance billing patients.

Certain details of the legislation are still to be worked out. An analysis by the Brookings Institution points to some of the unresolved issues.

One problem — which also affects some of the state laws — is that of how much insurers should have pay for emergency or ancillary services by out-of-network providers. One suggestion is that insurers should pay a little more than they would pay to in-network providers, but not too much more. Some state laws stipulate a payment of 125 percent of the in-network rate. If no bonus over the in-network rate is required, there is little incentive for insurers to assemble a list of reliable providers and negotiate attractive rates with them. If the bonus payment is too high, there is little incentive for providers to join a network at all.

Another important issue is how broadly the protections should apply. To work, they need to cover all situations where patients have no realistic choice of providers, but if they are too broad, the patients have little incentive to choose a provider with a narrow network. Still another issue is how to handle ambulance services, which are another source of unexpected bills.

Hopefully, these issues can be resolved and the bill, or one like it, will pass. Wouldn’t it be nice to think that our hyper-partisan Congress could actually get together and solve a problem that now leaves millions of Americans lying awake with worry?